Xiaomi 11i series launching in India on January 6

Xiaomi 11i series will make its debut in India on January 6. The 120W HyperCharge solution can charge a battery to 100 percent in 15 minutes. 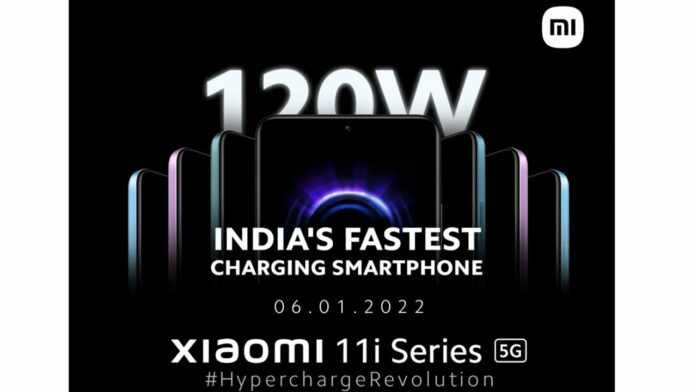 Xiaomi has today announced to launch the Xiaomi 11i Series in India on January 6. The series will include smartphones like Xiaomi 11i and Xiaomi 11i HyperCharge. The latter will come with India’s first 120W fast charging support that can charge up to 100% in 15 minutes.

Redmi Note 11 Pro and Note 11 Pro+, which were launched back in October in China, will be launched as Xiaomi 11i and Xiaomi 11i HyperCharge in India. In addition, the series will be available for purchase via Flipkart in India. Let’s look at the Xiaomi 11i series specs, features and more.

Xiaomi 11i and Xiaomi 11i HyperCharge Specifications

Both the phones will feature a 6.67-inch AMOLED display with a 120Hz refresh rate. Further, there will be a 360Hz touch sampling rate and a punch hole at the front. They will be powered by an octa-core MediaTek Dimensity 920 SoC. The chipset will be paired with up to 8GB of RAM and up to 256GB of storage.

At the rear, the Xiaomi 11i and Xiaomi 11i HyperCharge will come with a quad-camera setup. This setup includes a 108-megapixel f/1.89 primary sensor with dual ISO. In addition, there will be an 8-megapixel ultrawide cam with 120-degree FoV ( Field of view) and a 2-megapixel telemacro camera. The front-facing camera has a 16-megapixel sensor.