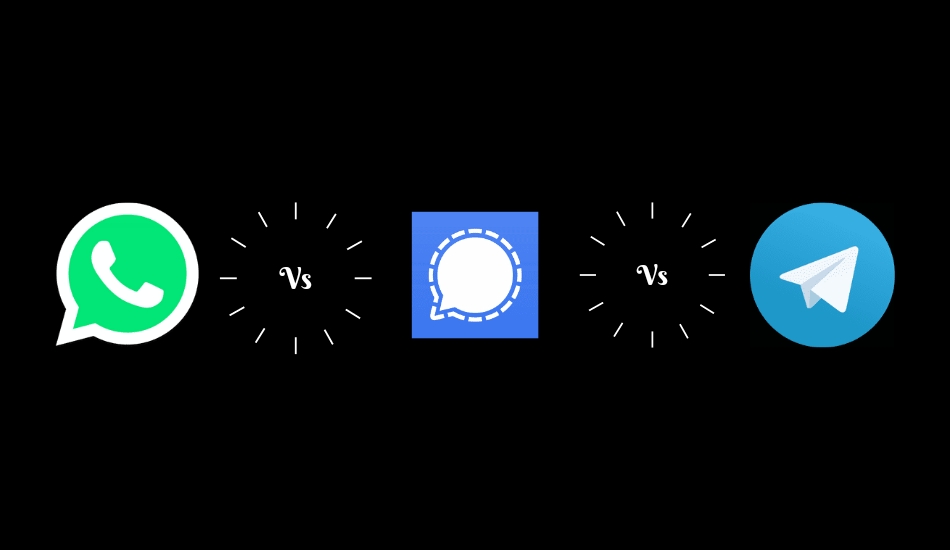 The chat apps have been gaining a lol of popularity but which one's the best of them all? Let's have a look.

While the chat application WhatsApp is facing a lot of heat from users all around the world, its rivals Signal and Telegram are gaining a lot of users worldwide, on the other hand.

With WhatsApp’s change in privacy, Signal and Telegram have left no stone unturned to make users believe that these two apps are much more secure than WhatsApp has ever been. Even though WhatsApp has clarified the new privacy policy doesn’t affect personal chats with your contacts except business accounts, will users ever be able to believe that their chats are secure?

The question needs to be answered and that’s why we are here to help you decide if WhatsApp is still secure and if it can be trusted when compared to its rivals. Here’s a head-to-head comparison between WhatsApp, Telegram and Signal on the basis of three aspects – UI, Features and of course, Security. 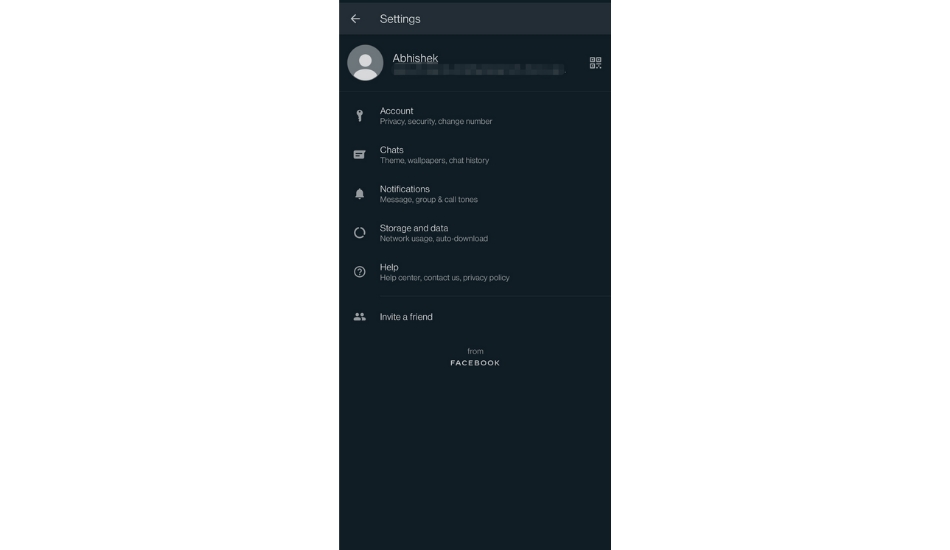 Starting off with UI, the UI on WhatsApp is pretty simple with 3 main tabs labeled as Calls, Chats and Status that are self-explanatory. We get a ‘New Chat’ button on the bottom right for creating new chats, a ‘Search Chats’ button on top right along with the three-dot menu for heading into Settings, creating a new group, broadcast, opening WhatsApp Web, making payments, or going to Starred Messages section.

Once you open a chat, the text input field is on the lower side of the display along with Emoji, Attach Media, Camera and voice note buttons. From the top right, you can call/video call the contact, search for the chat, mute notification, change wallpaper, export the chat, block the contact and more. 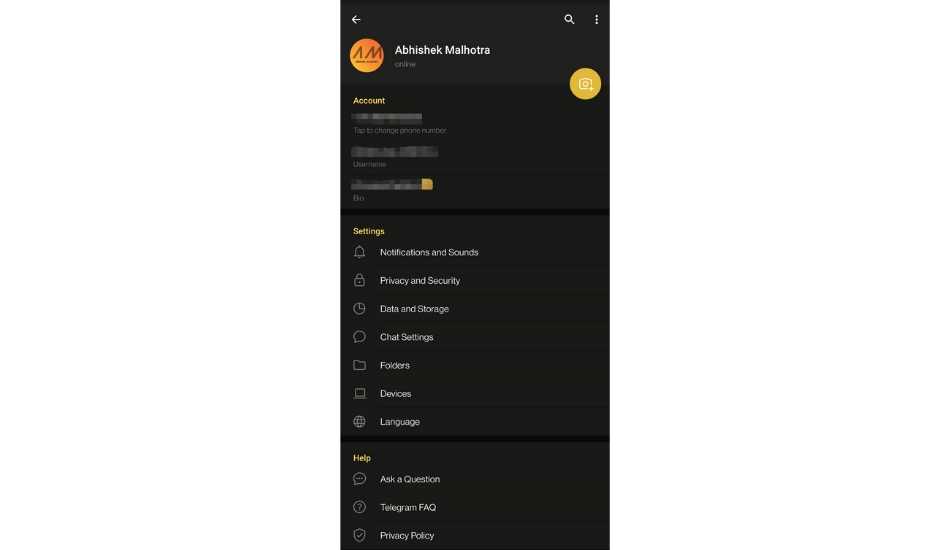 On Telegram, things change a bit as most of the things such as Call logs, option for creating a new group, heading in to settings, and more are stored in the hamburger menu. A button that remains similar to WhatsApp is the floating button on the bottom right for creating new chats, groups, secret chat and more. There are no tabs in Telegram and everything is shown on the single screen.

After opening a chat, things remain similar to WhatsApp with similar button placements. 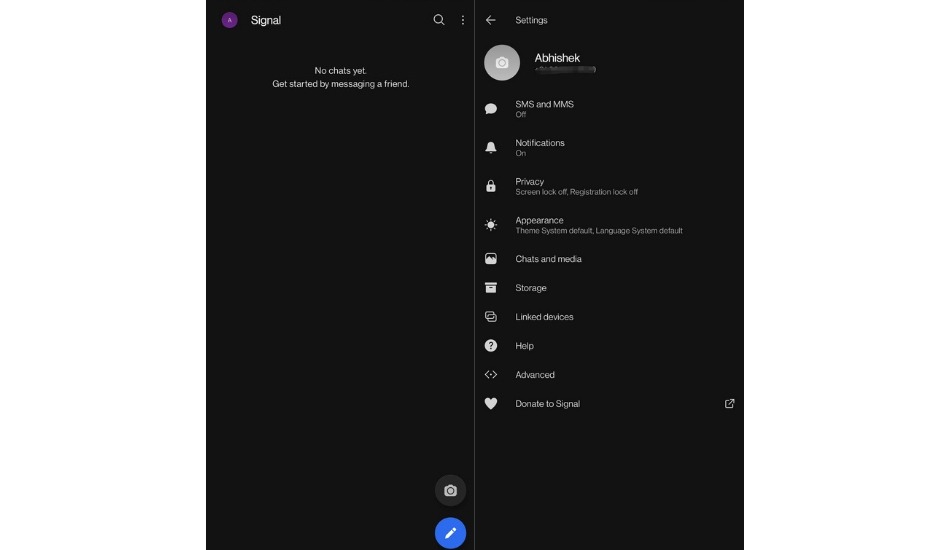 Talking about Signal, the app UI is more identical to WhatsApp with chats being shown on the main screen but no tabs. Most of the button placements on the main chats screen and within the chat remain the same as WhatsApp. For going into settings, you can go through the three-dot menu or click on your profile pic on the top left.

This is the aspect in which the three apps differentiate the most from each other. We can already say that Telegram is the most feature rich application out of the three, followed by WhatsApp and then Signal at the last. 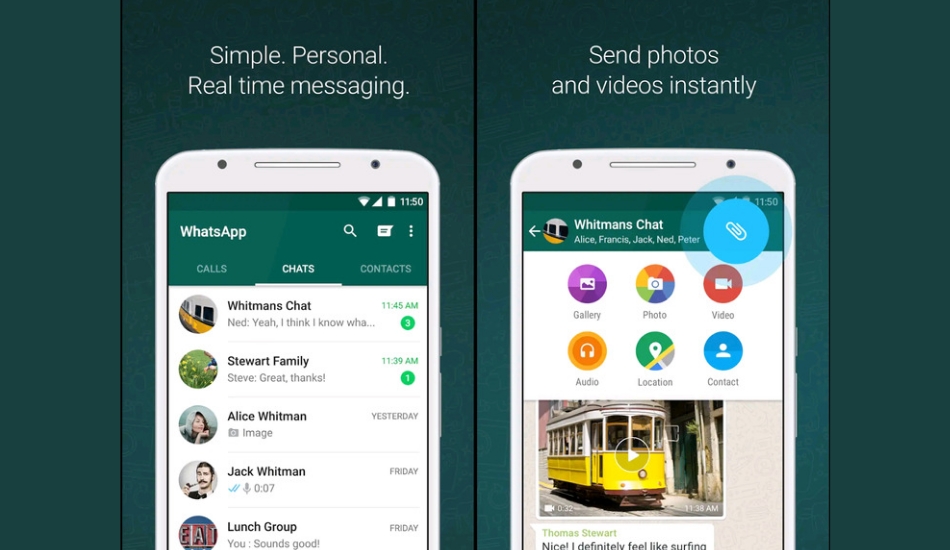 The feature set on WhatsApp is limited. One can backup chats to Google Drive and locally so if they switch their devices, they can restore their chats on the new devices. But this doesn’t work with cross-platform functionality as on Android, WhatsApp makes backups on Google Drive but on iOS, the backup is made on iCloud. This means that you can’t restore your chats if you ever decide to switch from Android to iOS or vice-versa unless you take help from the paid softwares such as Dr.Fone.

You can export chats though within a Zip file and choose to have media included or not which is good. Other features such as changing Wallpapers, Notification customization, Dark/Light mode themes, two-factor authentication, and more, are all present.

You can use WhatsApp on your computer through WhatsApp Web, or WhatsApp desktop application available for both Mac and Windows. Unfortunately, your phone will have to be connected to the internet to receive new messages on your computer but this is changing soon. 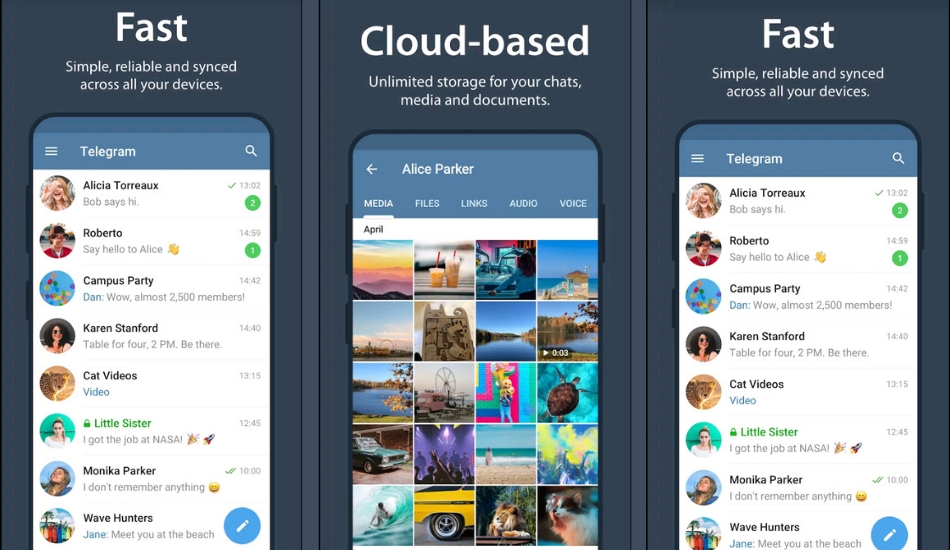 For Telegram, one doesn’t have to care about backups at all as Telegram is a cloud-based messenger with seamless sync. As a result, you can access your messages from several devices at once, including tablets and computers, and share an unlimited number of photos, videos and files (doc, zip, mp3, etc.) of up to 2 GB each. And if you don’t want to store all that data on your device, you can always keep it in the cloud.

You can use Telegram on smartphones, tablets, and even computers. It has apps for iOS (9.0 and above) and Android (4.1 and up). You can also use Telegram’s web version or install one of their desktop apps for Windows, macOS, and Linux.

Another feature which WhatsApp is working on, is multi-device support. But Telegram already has it since long and you can use Telegram on as many devices as you want, all at the same time. Even when WhatsApp brings the feature, it is rumored to support only 4 devices simultaneously and that too with various limitations.

Advanced customization features such as Theme creation, custom themes, accent colors and much more is present within the application. Another feature I like the most is the ‘Saved Messages’ feature through which you can save anything on one device and then open it or download it on another because again, the app is cloud based.

Another main feature, or rather it should be called a characteristic of the app is that it is open-source. And that is why we have different Telegram clients such as Telegram X, that have a different UI and even some different feature sets for each client. This doesn’t mean that the cloud based sync will stop working if you don’t use the default Telegram app, because the source code for the clients remains the same as Telegram’s.

Additional features such as end-to-end encryption for secret chats, 2-factor authentication, and more are included as well. 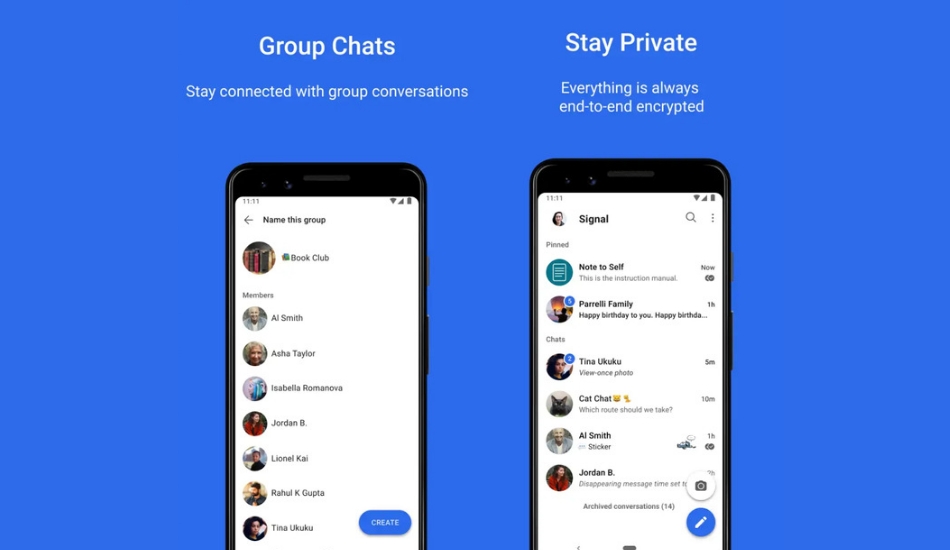 Coming to Signal, the app has the least amount of features compared to the other two but it doesn’t mean that it misses out on basic ones. Features such as Deleting messages for everyone (that is included in WhatsApp and Telegram both), read receipts, PIN lock, backing up chats, Theming, are all present.

The main reason I wouldn’t want to switch to Signal is the lack of cloud backups. It can only make and store backups locally on the device meaning you will have to go through a tedious process of transferring your chats from one phone to another through a computer or some other data transfer app.

The app that has the most features is hands down, Telegram that comes with a host of features which will prove to be useful in some way or the other.

This is where most of the people would make a decision regarding which app they want to use as their daily means of communication.

WhatsApp has already conveyed through multiple means that all of its chats including group ones, are end-to-end encrypted. This means that neither WhatsApp, nor its parent company Facebook, nor any other person can view the chat you have with your contact. Only the contact itself and you can view the chats.

The new privacy policy which WhatsApp will implement in May, will only affect the business chats that are obviously made with a business account. That is where Facebook can read the data to provide you ads which are relevant to your needs, be it on any app which is Facebook-owned.

WhatsApp states, ‘We do not retain your messages in the ordinary course of providing our Services to you. Once your messages (including your chats, photos, videos, voice messages, files, and share location information) are delivered, they are deleted from our servers. Your messages are stored on your own device. If a message cannot be delivered immediately (for example, if you are offline), we may keep it on our servers for up to 30 days as we try to deliver it. If a message is still undelivered after 30 days, we delete it’.

‘To improve performance and deliver media messages more efficiently, such as when many people are sharing a popular photo or video, we may retain that content on our servers for a longer period of time. We also offer end-to-end encryption for our Services, which is on by default, when you and the people with whom you message use a version of our app released after April 2, 2016. End-to-end encryption means that your messages are encrypted to protect against us and third parties from reading them’, it further states.

Telegram is based on the MTProto protocol and as per its claims, it is more secure than WhatsApp. Telegram supports two layers of secure encryption including Server-client encryption which is used in Cloud Chats (private and group chats), and Secret Chats use an additional layer of client-client encryption. All data, regardless of type, is encrypted in the same way — be it text, media or files.

Does this mean if only secret chats are end-to-end encrypted while other cloud based chats aren’t, it is unsafe to use Telegram? The simple answer is No, because even Cloud Chats use client-server/server-client encryption and are stored encrypted in the Telegram Cloud. This enables your cloud messages to be both secure and immediately accessible from any of your devices – even if you lose your device altogether.

Telegram also allows experts to independently verify that the code published on GitHub is the exact same code that is used to build the apps you download from App Store or Google Play. It also welcomes security experts to audit their system, should there be any type of concern regarding privacy.

Signal allows you to make Signal Profiles (your name and other information) that is encrypted. If you lose or switch devices, your existing profile can be recovered using your PIN. Along with this, Signal conversations are always end-to-end encrypted, which means that they can only be read or heard by your intended recipients.

The complete source code for the Signal clients and the Signal server is also available on GitHub which enables interested parties to examine the code for security and correctness.

Privacy is what everyone wants in today’s world and we can say that all three apps are private in a way that is satisfactory. Even though WhatsApp does share your data with Facebook, as mentioned multiple times before, it is most related to the chats you have with business accounts and NOT with personal contacts. Telegram is cloud based as well as secure at the same time and even Signal chats are end-to-end encrypted.

The only difference that can make one decide regarding which app to use is the feature set. And in our opinion, Telegram is the best option to go for if you want complete security along with ease of use and customization. WhatsApp can be the second alternative as billions of people worldwide use WhatsApp and it has a decent feature set. The Signal app is still in its early stages compared to the other two and has a lot to catch up on, but is another decent alternative if none of the other two suit you.