WhatsApp View Once feature rolling out in beta

WhatsApp has released the View Once feature in the beta version of the Android app. The feature allows to send photos/videos that are viewable only once. 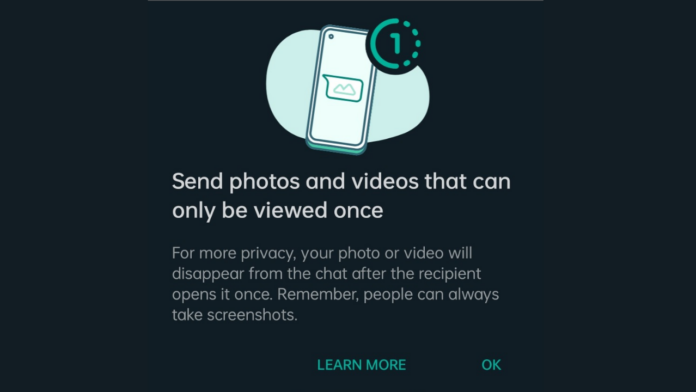 WhatsApp is rolling out a new feature today to the beta users called ‘View Once’. The new ‘View Once’ feature for photos allows enhanced privacy for a user.

As the name suggests, the new photos and videos sent using this mode can only be viewed once. After that, they will be deleted.

How to use WhatsApp View Once

To use the WhatsApp View Once feature, first load the photo from the gallery onto the chat. Then, click on the ‘1’ in a circle to the right of the chat input box. Once you click on it, WhatsApp will describe how the feature works.

The photo or video you send using this mode can’t be viewed again by you in the chat. Instead, there will be the same icon in the chat that also appeared in the chat input box. Once the user has opened the photo or video, you will be notified, and the text of the message will be changed to ‘Opened’.

The user will still be notified that you opened the photo even if you have disabled ‘Read Receipts’. Also, if you are sending the photo or video to a group that has a contact who you block, they will still see the photo/video. The feature will work even if the other person isn’t on the latest version and is not having the ‘View Once’ feature.

The recipient might also take a screenshot of the picture you have sent using ‘View Once’. However, WhatsApp will not notify you if the person has taken a screenshot because such a notifier doesn’t exist in the app.