WhatsApp may soon allow you to edit messages

A much requested feature could finally arrive in the famous chat app. 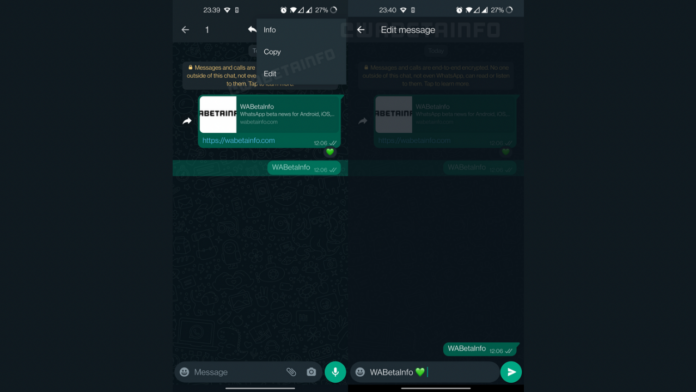 WhatsApp has been slow in adding essential features to its app and one of those features is the Edit option. A new report now suggests that WhatsApp could soon allow users to edit messages. Moreover, the report also suggests that the chat app could add support for Skin tones in message reactions.

WABetaInfo reports that WhatsApp has started testing the option to allow users to edit their already sent text messages. It would appear alongside the existing ‘Info’ and ’Copy’ buttons that appear inside the overflow menu once you long-press a text message on the app.

WABetaInfo has also shared a couple of screenshots to show how the edit option would work. After selecting Edit from the pop-up menu after long-pressing the text message, users will be able to edit the text. It is not confirmed whether the recipient will be able to know if the message has been edited.

Further, users may also not get the ability to know the edit history of a message to check its previous versions. This feature is said to arrive on Android, iOS and Desktop versions of the app. The very same option has been tested multiple times in the past back in 2016 and 2017. However, WhatsApp scrapped it at that time and released the ’Delete for Everyone’ feature instead.

In another report, WhatsApp is testing support for different skin tones for message reactions, a feature it recently launched for the public. WABetaInfo reports that it has already been rolled out to some users through WhatsApp for Android beta version 2.22.13.4.

Using this option, the skin tone of the reaction emojis will automatically change according to the last used skin tone by the user in the main emojis list. Various skin tones currently seems to be limited to the Thumbs Up and Folded Hands emojis.