WhatsApp is working on a companion mode that could allow users to use same account on multiple devices. 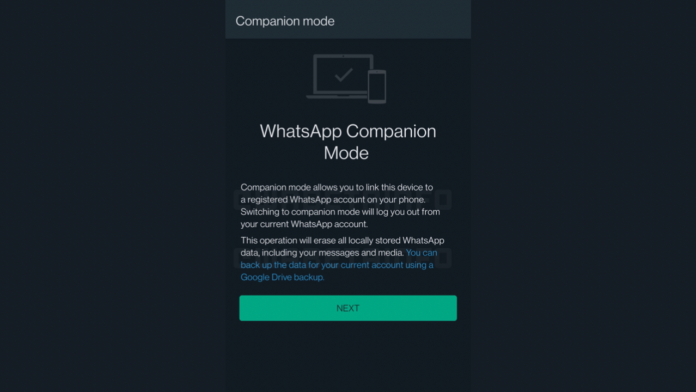 WhatsApp recently unveiled a bunch of features such as Reactions that are rolling out globally. However, the chat app is also working on a new feature called Companion Mode that could allow the user to use the same WhatsApp account on two different devices.

The report comes from the usual feature tracker WABetaInfo as per whom, you will be able to use the same WhatsApp account on more than 1 device at the same time. This is already possible when linking a desktop device, however, the chat app is working on bringing the ability to link a secondary phone with a future update.

Since this feature is under development, more details are yet to be made available. “What we can confirm is that the companion mode will also let us link Android tablets”, said WhatsApp. The trackers also says that even if the screenshot is taken from WhatsApp beta for Android, it confirms that the chat app is also working on the same feature on WhatsApp beta for iOS.

Quite recently, WhatsApp has started rolling out emoji reactions to all its users. Now the users can express their emotions to their chats. Initially users will get only six emoji reactions, including like, love, laugh, surprise, sad, and thanks. To add a reaction, you need to long press on a message to which you want to react. Then tap to select the displayed emoji.