WhatsApp is introducing a new feature to its app where one will be able to join the call from directly within the group window. 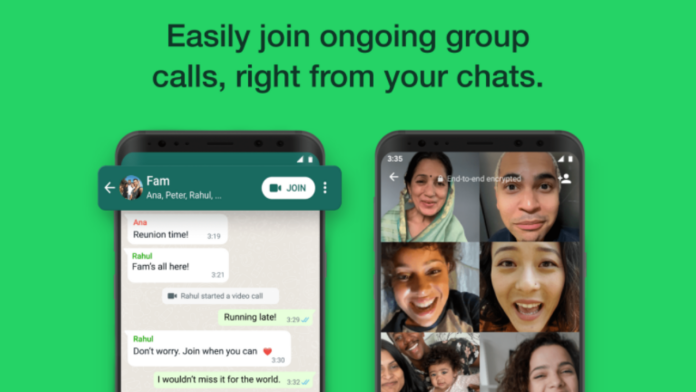 WhatsApp is introducing a new feature where the app will allow to join ongoing calls from directly within the group. Joinable calls were introduced by WhatsApp first back in July where users could join a group call after it has begun already.

With the new feature, users can now call a WhatsApp group and join the call from directly within a group chat window. WhatsApp notes that the call notification will now show the name of the group instead of the name of the participants.

Additionally, now when you open WhatsApp, the ongoing call is shown in the chat list. This way, users will be able to see which groups have live calls as soon as they open the app.

WhatsApp is reportedly working on a new feature where one will be able to pause recording voice messages. Furthermore, the feature is said to be made available soon to beta users, however, an exact timeline hasn’t been revealed. In addition, this feature will help the users prevent stopping a recording and then record it again altogether.

There’s no information as to when the feature will make its way to the app. The company is also working on redesigning the contact info section in a future update. Further, the new design will show a chat, audio and video option below the contact name. Moreover, a fix for the Google Drive backup issue has now been found where the backup got stuck on 100% and didn’t finish properly.