What is pixel binning? Everything you need to know

Whats is pixel binning? How does it work? How is it helpful? All these questions are answered here!

Smartphone cameras have come a long way since the first time they were introduced. With the evolution and advancement in mobile imaging technology, smartphone photography is slowly inching towards the quality of professional cameras. However, they are not there yet.

The biggest limitation is the physical size. A DSLR is way bigger than a smartphone allowing it to house more components like a bigger sensor.

A sensor is what sits at the heart of any camera. It is laden with photo sites or pixels that capture light. Pixels are physical elements and usually comprise of three or four colours in unison with varying intensity (Red, Green, Blue)

A basic rule of thumb dictates that bigger the pixel, the more light it will capture giving you better low light images.

Pixel size is usually measured in microns (a millionth of a meter), with anything at or below one micron considered small. Smartphones, with their physical limitations, cannot incorporate sensors with pixels as large as a professional camera. Smartphone manufacturers are moving towards a higher megapixel count rather than bigger pixels which results in the cramming of smaller pixels onto a sensor resulting in poor low light performance. It led to the introduction of pixel binning.

What is Pixel Binning?

Pixel binning is essentially the combination of four pixels to form one large superpixel. This essentially increases the data received from the pixels as four pixels are combined into one.The light capture increased four times as the pixels are combined. Pixel binning is done with the help of a quad Bayer filter on the sensor.A Bayer filter is a colour filter used in all digital camera sensors, sitting atop the pixels/photo sites and capturing an image with red, green and blue colours. 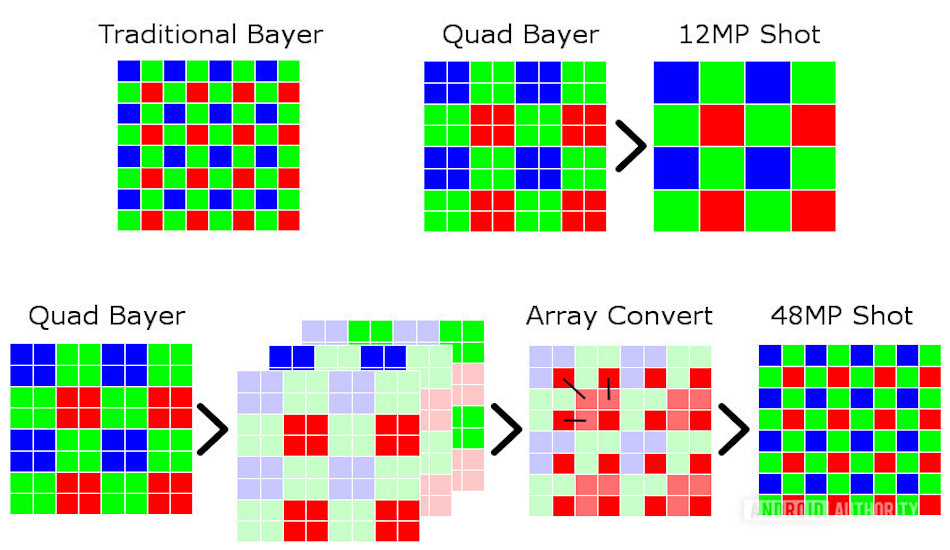 A standard Bayer filter has 50 percent green filters, 25 percent red filters, and 25 percent blue filters. This is to imitate the human eye, which is sensitive to green light. A quad Bayer filter groups these colours into clusters of four then uses software-based array conversion processing to enable pixel binning.

A quad Bayer filter is very versatile as it allows you to take high-resolution images during the day and lower resolution pixel-binned images in darker conditions.

Currently companies like Xiaomi, Huawei, Vivo and LG have been known to employ this technology on their phones but, if you have a phone with a high-resolution sensor( 32MP, 48MP, 64MP) chances are that it’s using pixel binning for regular imaging. This is the reason why smartphones have a separate toggle for high-resolution images ( 48MP images in Pro mode) as it’s not viable to shoot in such high resolution all the time.

The biggest downfall of pixel binning is the reduction of resolution. The resolution goes down by 1/4thas the four pixels are combined to function as one. A 48MP sensor will only output a 12MP image when binned. It should also be noted that if a sensor is small, pixel binning will not add much to the overall image. The same applies if the imaging quality of the sensor is not the best. The image signal processor and post-image processing also play an important role in the development of the image. A phone with a good sensor and a weak ISP will produce bad binned images.

The imaging sensor on Smartphones thankfully is getting better. Manufacturers are realising the importance of a larger sensor and are also packing more pixels which will make a pixel binned images sharper. With smartphones getting better night modes that use high ISO and long exposure, pixel binning might not be used a lot in the future.