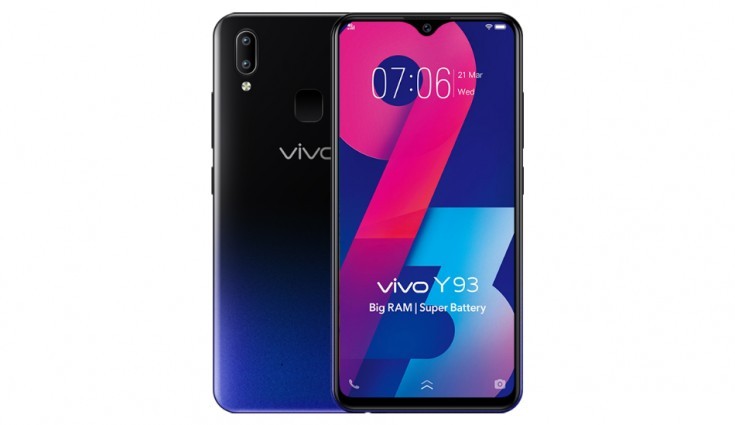 The base model with 3GB RAM with 64GB of internal storage now comes with a price tag of Rs 10,990.

Vivo has announced another price cut for its budget-centric smartphone, Vivo Y93, in India. This is the second price cut in the country after its price was slashed in March this year.

With this, the base model with 3GB RAM with 64GB of internal storage now comes with a price tag of Rs 10,990. Similarly, 4GB RAM with 32GB of internal storage variant now retails at a discounted price of Rs 11,990. The price cut is reflected on the company’s online store and on Amazon. To recall, Vivo Y93 was launched in India in January this year. The 3GB + 64GB variant was priced at Rs 14,990 and 4GB + 32GB variant was launched at Rs 13,990. However, the company slashed the price of 3GB RAM model and it was selling at Rs 12,990.

However, in March this year, the company announced a price cut on the smartphone. With this, the base model was retailing for Rs 11,990, while the 4GB RAM model was priced at Rs 12,990. To recollect its key specifications, the Vivo Y93 features a 6.22-inch HD+ display with a resolution of 1520×720 pixels and a 19:9 aspect ratio and a screen-to-body ratio of 88.6 per cent. It is powered by Octa-core MediaTek Helio P22 with PowerVR GE8320 GPU coupled with 3GB of RAM and 64GB of onboard storage.

On the camera front, it is equipped with a dual-camera setup that comes with a combination of 13-megapixel (f/2.2) primary lens and a 2-megapixel (f/2.4) secondary shooter with LED flash. For the front, the company has added an 8-megapixel selfie shooter with f/1.8 aperture.