The smartphone has a 16-megapixel autofocus camera and a LED flash in its rear panel while a 5-megapixel camera in its front.

Chinese smartphone manufacturer Vivo is all set to launch Vivo X9S and X9S Plus smartphones on July 6. While we already know some expected specs of Vivo X9s Plus smartphone, but Vivo X9s specification details were not known. But now, a Vivo device with model number Vivo TD1608 has been spotted on the Geekbench and GFXBench benchmarking websites which is most likely Vivo X9s. The listing has revealed the specifications of the upcoming device. The specifications seem to place right in the seet spot of mid-range devices with high specs around Rs 20,000. With no dual camera play here, it is an interestingcombination of features indeed.

In the GeekBench listing, the Vivo TD1608 got 1616 points in single-core test and in muli-core test it received 5821 points. As per the listing on Geekbench, the Vivo TD1608 has 4GB RAM and Qualcomm Snapdragon 660 1.84 GHz octa-core processor. The handset is based on the Android 7.1.1 Nougat operating system. 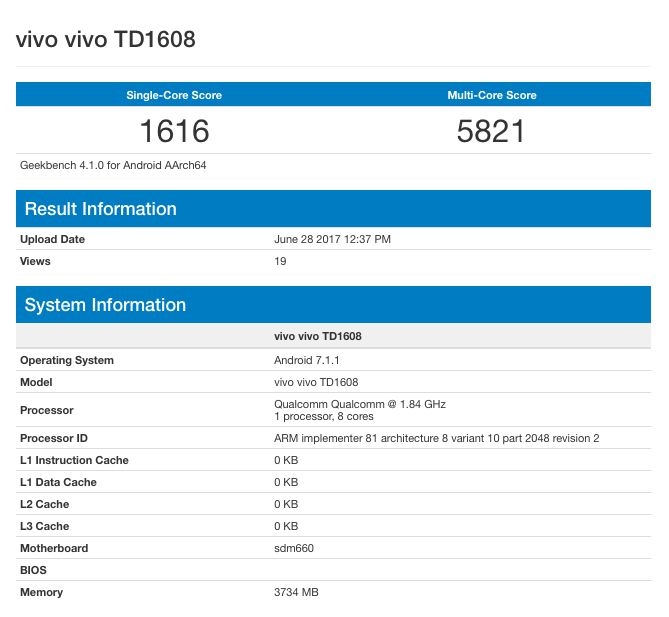 As per the listing on GFXBench, Vivo TD1608 has a 5.5-inch full HD display with 1920×1080 pixels resolution and 5 finger gesture support. It is powered by Snapdragon 660 2.2 GHz octa-core processor and 4GB RAM. It offers 64GB of internal storage out of which 47GB will be reserved for the users. In other words, the phone will be using up almost 17 GB for the OS and more. Besides, it has Adreno 512 GPU and Android 7.1.1 Nougat operating system. 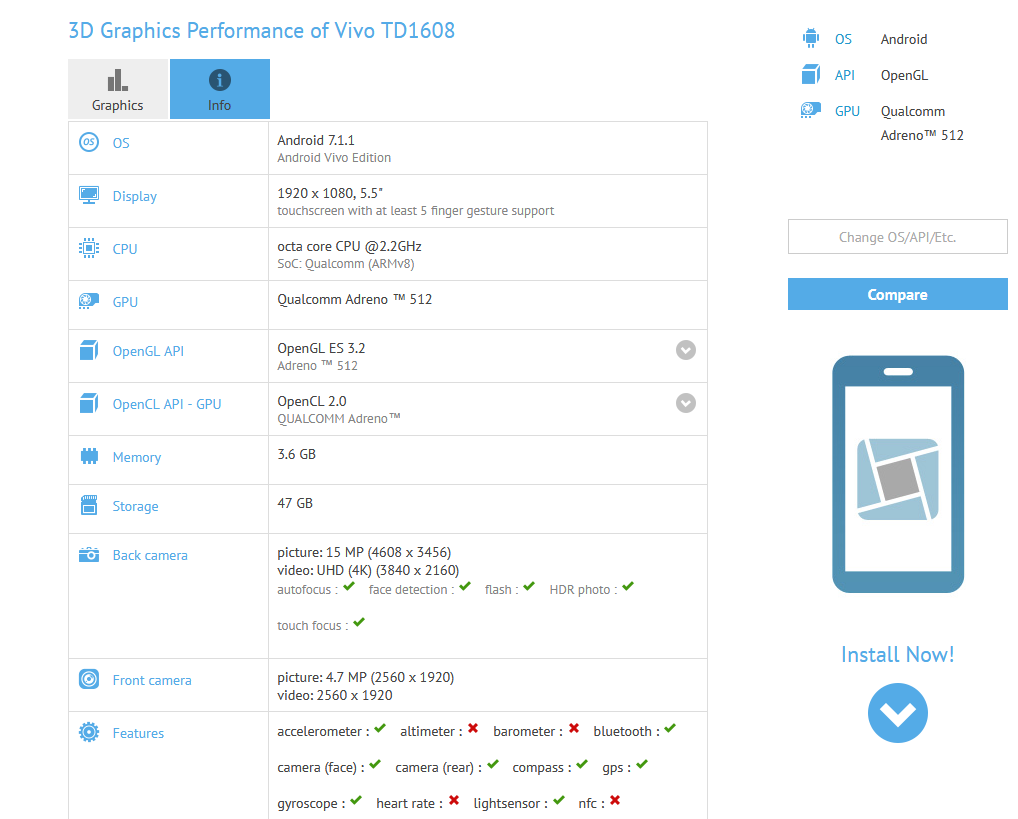 Vivo TD1608 has a 16-megapixel autofocus camera and an LED flash in its rear panel while a 5-megapixel camera in its front. The GFX listing shows that the device has connectivity features like Bluetooth, GPS and WiFi. As per the listing, the device has accelerometer, gyroscope, light sensor and proximity sensor as well.

Vivo X9S Plus passed the Ministry of Industry radio frequency certification earlier in China last month and was also spotted on TENNA certification website. As per the listing, Vivo X9s Plus features a 5.85-inch display that has OLED full HD display with 1920 x 1080 pixel resolution. It is powered by a 1.95 GHz octa-core processor which is coupled with 4GB RAM. It offers 64GB of internal storage, 128 GB expandable storage via a micro SD card, dual selfie camera setup of a 20-megapixel and 8-megapixel camera and a 16-megapixel rear camera.

The dual SIM phone runs on Android 7.1.1 Nougat operating system and is fueled by 3920 mAh battery. Connectivity options of the smartphone include 4G-LTE with VoLTE, Bluetooth, WiFi, GPS/A-GPS and a micro USB port. The dimensions of the phone are 162.59 x 78.84 x 7.25 mm and it weighs 170 g. The device is listed in Gold colour option. The phone has a Gravity sensor, distance sensor, an ambient light sensor as per the listing.