Vivo smartphone with 10GB RAM spotted on benchmarking site, could be Z3 Pro

The listing reveals that the phone has scored 2414 points in single-core test and 8434 points in multi-core test.

The Vivo device with model number vivo 1813 has been listed on the benchmarking website. The listing reveals that the phone has scored 2414 points in single-core test and 8434 points in multi-core test. 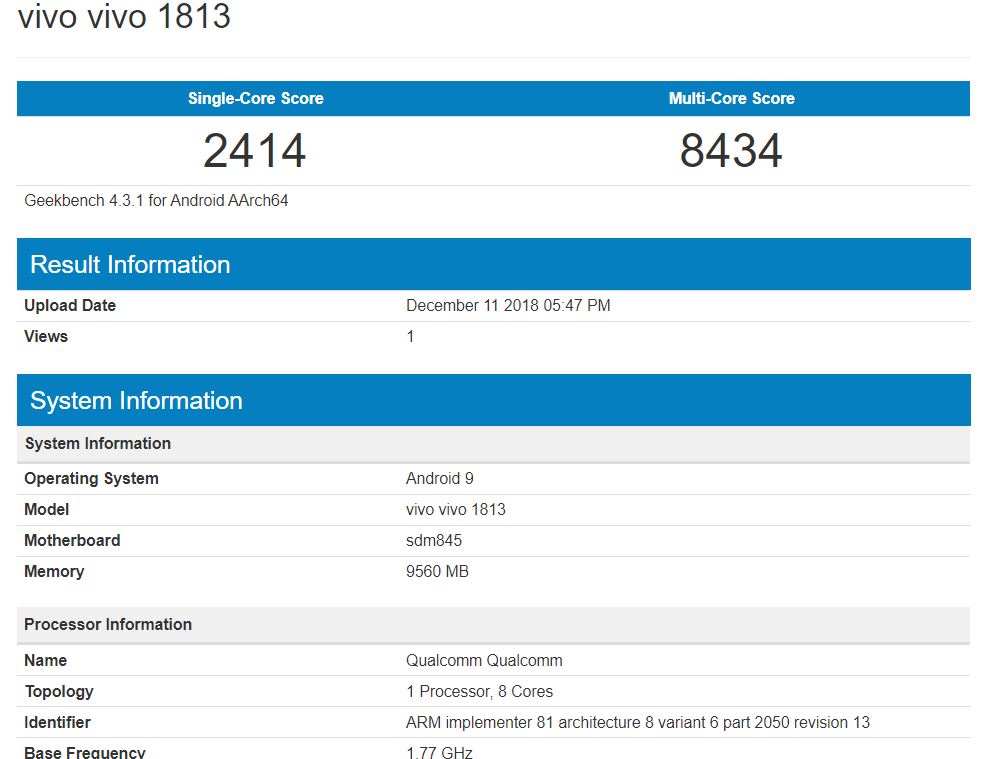 The listing reveals that the smartphone runs on Android 9.0 Pie. It will be powered by Qualcomm’s flagship Snapdragon 845 processor along with Adreno 630 GPU. The phone is backed by a 10GB of RAM, which seems to be another trend of 2019 in the smartphone domain.

Meanwhile, Vivo recently introduced its first dual-screen smartphone, the Vivo NEX Dual Screen in China. The smartphone will be available for an asking price of 4,998 yuan (approx. Rs 52,250). The NEX smartphone comes with two displays with the front panel featuring a 6.39-inch Full HD+ Super AMOLED screen of resolution 1080 x 2340 pixels and an aspect ratio of 19.5:9. Vivo says that the lack of any front sensors has allowed more room for the screen and the front display has thus achieved a screen-to-body ratio of 91.63 percent.

The secondary display is located at the back but is neither tall or bezel-less. In fact, the second screen is put there to make use of the triple camera system at the back which will also help in the case of facial recognition and selfies as a viewfinder for the camera. The second screen is a 5.49-inch standard FHD display with a 16:9 aspect ratio and a resolution of 1080 x 1920 pixels.