Seems like Vivo is working on a new smartphone with the Qualcomm Snapdragon 845 processor after Vivo NEX as a new Vivo smartphone has surfaced online. Vivo 1805 has been spotted on Geekbench benchmarking website.

Recently, Vivo launched Vivo NEX smartphone with Snapdragon 845 processor, pop-up camera and in-screen fingerprint. Now seems like, the company is working on another smartphone with the same processor as a new Vivo smartphone has surfaced online. Vivo 1805 has been spotted on Geekbench benchmarking website. The listing has thrown some light on the expected specifications of the upcoming smartphone. 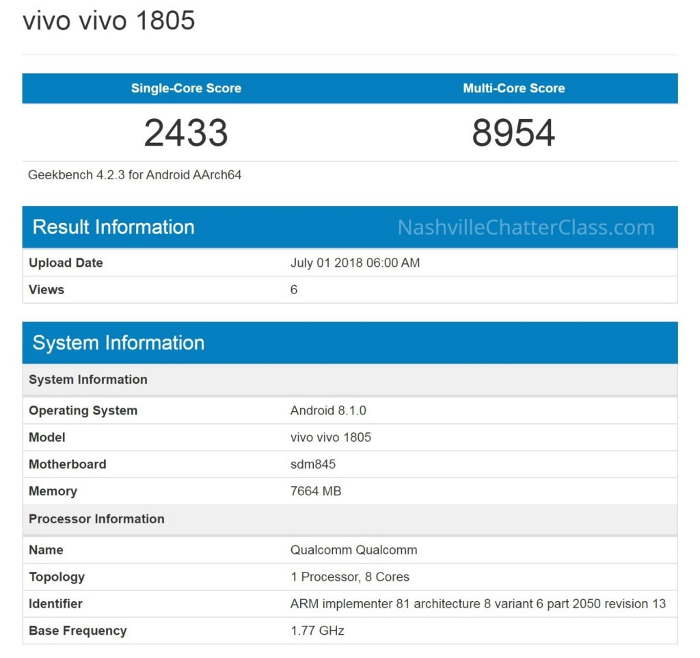 In the GeekBench listing via Nashvillechatterclass, the Vivo 1805 got 2433 points in single-core test and in multi-core test it received 8954 points. As per the listing on Geekbench, the Vivo 1805 has 8GB RAM and Qualcomm Snapdragon 845 1.77 GHz octa-core processor. The Vivo 1805 smartphone is shown in the listing running on the Android 8.1.0 Oreo operating system.

There is no information about the pricing and availability of the device as yet, however, given the fact that it has been spotted GeekBench, it will not be much long before we see some new leaks for this smartphone. However, it might also be a probability that Vivo 1805 is the very same Vivo NEX phone or any another SD845 SoC powered phone. So we request you to stay updated on our website for the same.

Note – The Lead image is of Vivo Nex.