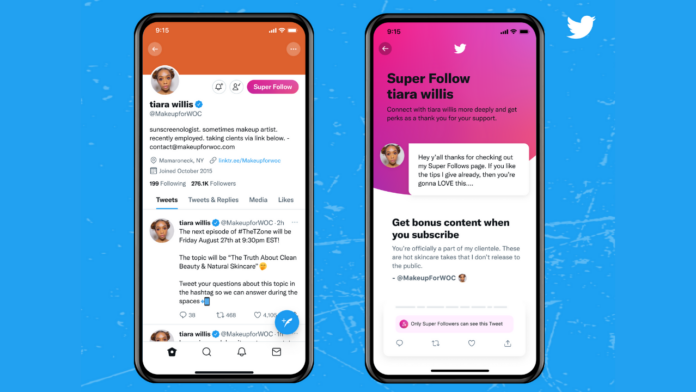 Twitter has introduced two new features to its platform called Super Follows and Safety Mode. The former allows the creators on Twitter to generate a monthly income by using a subscription-based module for its content. The latter allows people to block a certain account for hateful speech or potentially harmful language.

Super Follows is a new way to earn monthly revenue by sharing subscriber-only content with their followers on Twitter. With Super Follows, people can create an extra level of conversation on Twitter to interact authentically with their most engaged followers – all while earning money.

Safety Mode is another new feature that aims to reduce disruptive interactions. Starting today, Twitter is rolling out this safety feature to a small feedback group on iOS, Android, and Twitter.com. It is beginning with accounts that have English-language settings enabled.

It is a feature that temporarily blocks accounts for seven days for using potentially harmful language, such as insults or hateful remarks, or sending repetitive and uninvited replies or mentions. In addition, Twitter says that if its systems detect authors of the tweets as harmful, they will be auto blocked.

You can find information about the Tweets flagged through Safety Mode. One can also view the details of temporarily blocked accounts at any time. Before each Safety Mode period ends, you’ll receive a notification recapping this information.