There are many new features in the update, which include better app compatibility and enhanced screen rotation acceleration.

Android 3.2 Honeycomb is now available for Toshiba’s first Android tablet, the 10.1 inch Thrive. Notably, the thinner 7 inch version of Toshiba Thrive has Andriod 3.2 right from the day it was launched.

There are many new features in the update, which include better app compatibility and enhanced screen rotation acceleration.

The 10.1 inch Toshiba Thrive tablet was launched in July this year and the very next month it got its first update as the tab used to go to sleep for no reason at all and it used to wake up only after users restarted it. However, users complained that after installing the update, Android Market and YouTube widgets vanished from their device’s home screen. 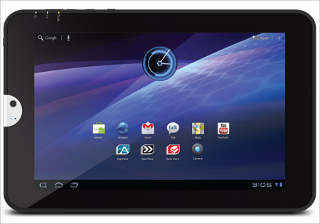 Usually, the Toshiba Thrive users will get a message for the update. Else, one can visit Toshiba Service Station through the Toshiba icon on the home screen and check for updates progressively. Users also need to remove their SD cards, and other devices connected using USB port before the update is initiated. During the update process, users would not be able to use their tablets.

Toshiba says the users should power off their devices during the update installation.