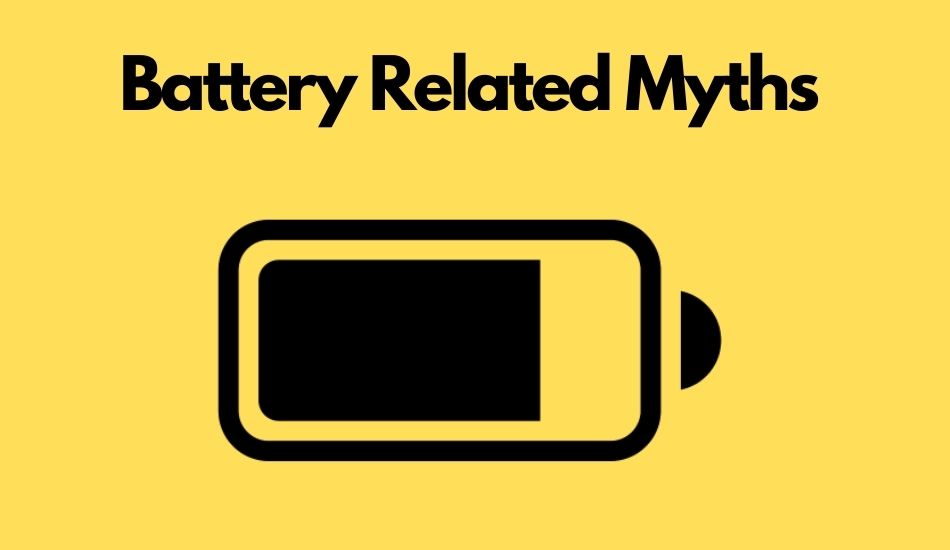 These are some of the popular myths that are still believed my many across people who use a smartphone. Here's a story busting these myths

Smartphones are advancing by the day in whatever aspect you think of. Be it the display, the performance, cameras and especially the battery. The battery life of a phone determines for how long you can use the advanced piece of tech in your hand and we have seen the batteries on a smartphone evolve.

All the smartphones now-a-days are equipped with a lithium-ion battery because when compared with a traditional battery technology, lithium-ion batteries charge faster, last longer and have a higher power density for more battery life in a lighter package.

But these batteries have characteristics that make people believe in myths. These myths cause you to worry too much even though they aren’t true. So to clear it out, take a read and beware what you believe in.

Myth 1: Plugging in your phone overnight harms the battery.

Well, not entirely. To explain the myth properly, the term ‘overcharging’ is used here which basically means that even after your phone reaches 100%, the current keeps flowing into the phone which degrades the battery life and causes too much heat.

Let me clear it out. No this does not happen as modern smartphones manage power efficiently. Which means that once the charge reaches 100%, the current flowing into the battery reduces down and the phone enters ‘Trickle Charge’ mode which keeps the current flow as minimum as possible.

However, high charging voltage may cause the battery to age faster than normal. The optimal charge percentage between which you should keep your phone is 30 to 80%. As going to a 100 percent every time will put more strain on the battery, hence, degrading it faster.

Myth 2: Killing apps running in the background save a lot of battery power.

No, this is not at all true. If we were in 2009, I would have put up links for apps which killed the background apps to save battery and memory. But we are in 2021, and the operating systems have got much smarter than they were in 2009. Android and iOS can handle background tasks very well now.

If you just killed the apps running in the background manually or with the help of some other app, you might have made things worse for your smartphone. Some apps just restart again as soon as you kill them as they are important for the proper functioning of your device. And you just wasted more power as the app came back to life again.

Also, the irony of this whole thing is that if you download an app to manage these things fot you, such as a battery saver app, the app that is helping you save power is utilizing more power by killing the apps which would be saved if you hadn’t done it.

Myth 3: Using the charger of another brand or a charger that was not provided by the brand of your phone harms the battery.

This myth basically involves marketing. You will often find in the manual of your phone where you are instructed to always use the charger which is provided by the company. Of course, the companies will tell you to do so considering they want to sell their accessories. But its not always important to use the brand’s charger as it might not be always available to you. For example, with the latest iPhone 12 series, Apple provides a lightning to lightning cable instead of the traditional USB A to lightning. Now, if you are buying the smartphone for the first time, you won’t have a charger that will have lightning port and thereby, you end up buying it from the brand.

A charger of a known and reputed brand will work just fine. Modern batteries and smartphones have precautionary methods which help the phone to only allow the input they can handle efficiently. For example, if you are using a smartphone by Xiaomi which supports Qualcomm Fast Charging, instead of using the charger provided by Xiaomi, you can use the one by Qualcomm which will also give you same charging speed. But the chargers that are super cheap, already look shady by the looks and are not from known brands, are the ones which might harm your phone. So look out for them.

Talking about charging speeds, this is the only thing which might differ with every charger. This happens because not all chargers support fast charging and every charger has a different output.

Myth 4: Completely discharge your phone before charging it again.

As mentioned earlier, 30-80% is the best spot for your device. It is recommended to completely discharge your battery once or twice in 3 months for the software to re-calibrate it properly and give you better results.

These were the most popular myths that are still believed by many people over Android as well as iOS community. Operating systems like Android and iOS have got so much smarter in the past years that you really don’t need to worry much about the battery life of your phone. It is still recommended to swap out the battery for a replacement after 3 years if you want to stretch things out. If you plan to buy a new phone every year or two, then there’s nothing to worry about.