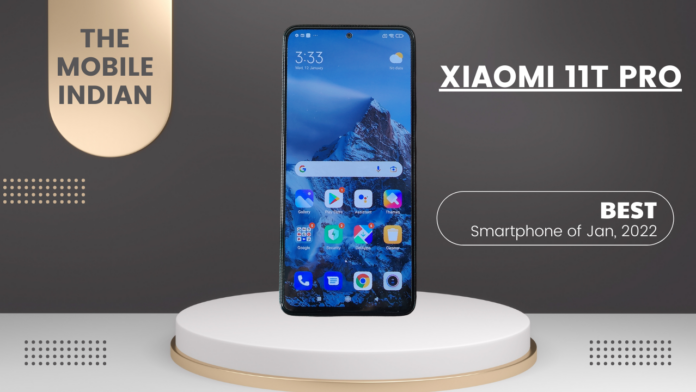 Although we are just one month into 2022, January saw a number of phones get launched in the Indian market. Brands like Samsung, OnePlus, Xiaomi, Vivo, and Motorola, all dipped their toes in the January smartphone pool and drenched us with new phone feels. But even though the competition cloud was quite dense, there were a few phones that managed to shine through it.

Some of these phones were ‘value for money’ stars while others were more premium offerings. So here are TMI’s phones of January 2022, which kickstarted the year with a bang.

The best phone launched in January in our books is hands down the Xiaomi 11T Pro. It is the smartphone supreme when it comes to value for money. The phone fits the ‘flagship killer’ category perfectly, as it was launched with premium specs and an extremely competitive price (Rs 39,999).

It is powered by the Qualcomm Snapdragon 888 processor which is the most powerful chipset in the country. It also has a 10 -bit beautiful display and stereo speakers that are tuned by Harman Kordon and features Xiaomi’s HyperCharge technology which allows the phone to get charged at a whopping 120 W. It brings a 120 W adapter in its box, which is capable of charging the phone in under 20 minutes. In the times of fast and faster charging, this is by far the fastest we have seen on a flagship-level smartphone.

All of this makes the phone basically the best sub Rs. 40,000 phone there is to get and the best phone launched in the month of January’22. Its design might seem basic to some, but it is what on the inside makes the Xiaomi 11T Pro the boss phone.

Runner Up: Samsung S21 FE: We are fans of this fan edition

It was a little late to the party as compared to its predecessor, but January finally saw the launch of the Samsung Galaxy S21 FE. We are so glad that it did because the phone is amongst the best in its category. Some might complain that it does not run on the Qualcomm Snapdragon 888 processor but Exynos 1200 is more than capable of handling whatever Snapdragon 888 can, as per our experience. What works for the Galaxy S21 FE is also the fact it is a magnificent multimedia device.

The cameras on the S21 FE are very good and consistent. Yes, it is slightly on the expensive side (Rs 54,999) and might not seem as value for money as some of the other January-launched devices in this list, but if you want the Samsung name with the latest and some of the best that the brand has to offer topped with the latest version of Android, this is the phone to pick.

A new OnePlus 9 was launched this January and it was a “T” variant of the OnePlus 9R. It features the formidable Qualcomm Snapdragon 888 processor bridging the gap between the other OnePlus 9 series devices and the OnePlus 9R (which ran on a slightly inferior processor) making it stand amongst the best devices launched last month.

The phone comes with one of the most responsive displays around – with its touch sampling rate going all the way up to 600 Hz. Xiaomi may have won the fastest charging race but OnePlus pretty much has been the overlord of fast charging for a while now and it brings its famous Warp Charge technology to the OnePlus 9RT. This means the phone comes with support for 65 W fast charging and the OnePlus packs a 65 W adapter in the box.

It can charge the phone completely in under 30 minutes which is very impressive as well. But one of the biggest USPs of the OnePlus 9RT in our books is the phone’s classy and edgy design. It comes with a glass back which is so smooth that it almost seems metallic.

Even though the OnePlus 9RT has arrived slightly late to the smartphone party (it was launched in China in late October), the phone remains one of the best devices launched in January, not least because it comes with a Rs 42,999 price tag, which reminds us of its flagship killing heritage.

They might not have made it to the final awards podium, but both the Vivo V23 Pro and the Micromax IN Note 2 grabbed attention in January.

The V23 Pro turned heads with its incredibly smart design and colour changing back, and also added a new dimension to selfie cameras with its dual camera set up. Although its price of Rs 38,999, was seen as expensive in some quarters, it was a very notable device in terms of both style and selfie quotient.

The IN Note 2 on the other hand represents perhaps the most impressive device we have seen from Micromax since its comeback in 2020, with a brilliant AMOLED display, a reasonably powerful processor and an impressive camera array. Its price is classic value for money – Rs 13,490.

Some say its design is similar to Samsung’s flagships. Since when was that a problem? The phone has the potential to turn around Micromax’s fortunes, but a lot depends on its actual performance.