After its reveal in 2017, Tesla finally started delivering its Semi electric truck to big brands and companies in the United States. 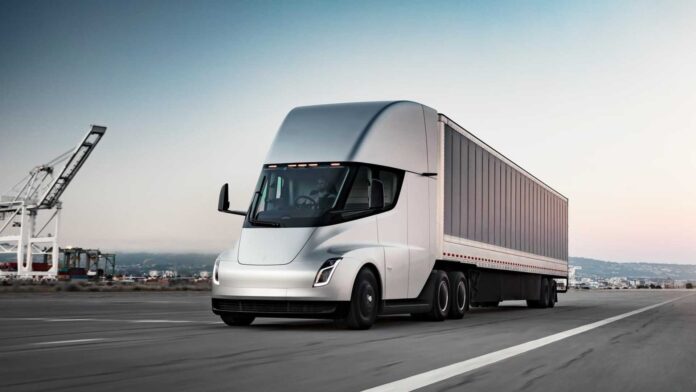 Elon Musk, CEO of Tesla, has delivered the first batch of Tesla Semi Truck EV vehicles to Pepsico’s Frito-Lay plant based in Modesto, California. The delivery event took place at Tesla’s Gigafactory in Sparks, Nevada, amongst many enthusiasts and was live-streamed.

After the first reveal of the Semi Truck in 2017 in concept form, Tesla took five years to bring the complete feature-packed vehicle to its proper form. There were various reasons for the launch delay, and one of the main reasons was the COVID-19 pandemic.

During the pandemic, Tesla and other major companies have gone through a shortage of parts delaying the manufacturing process. Nonetheless, the company seems to be getting back on track.

The Semi Truck adds up as the fifth vehicle in the Tesla’s line-up with existing passenger vehicle options such as the Model S, 3, X, and Y. With the introduction of the Semi truck, Tesla has forayed into the Truck segment.

Musk says in the delivery event, “If you’re a trucker and want the most badass rig on the road, this is it.” “It looks sick,” he adds. He addressed the truck ‘as a Beast,’ claiming it as ”You want to drive that. I mean, that thing looks like it came from the future.”

Tesla states that Semi consists of four independent motors on the rear axles that can help accelerate the vehicle from 0-60mph in 20 seconds. Musk says that “It’s fast to accelerate and to brake.” Moreover, the truck carries the existing technology in the current line-up of vehicles from the brand.

The company uses a new 1,000-volt powertrain architecture that will be used in future vehicle productions in Tesla. Besides, the company has used the existing technology from the Model vehicles, such as infotainment, heat pump, and inverter systems.

The reason for using existing tech, as per the company, is that they’ve clocked many milestones and have a clear idea of the wear of these parts and technology.

The implementation of the Tesla Semi on these freeways will improve the overall health of those communities, says Musk. Moreover, the batteries of the Semi can juice out a mileage of up to 500 miles on a single charge. Tesla has even tested the efficiency of 8 trucks that clocked a 500-mile trip fully loaded with 81,000 pounds of cargo without a stop for a recharge.

The business brands like Walmart, FedEx, Meijer Inc., and J.B. Hunt Transport Services Inc. have already reserved the Semi in the past. As of now, the PepsiCo – Fritolay has received the first 100 Semis at the event today.