Fujitsu F-074 features a 4 inch Amoled screen & 5 MP camera that can be used for underwater photography too.

Tata Docomo has launched an Android 4.0 based phone from Fujitsu, which is the number 1 phone maker in Japan and is also Docomo’s one of the largest partners in their home country (Japan).

Named as Fujitsu F-074, the phone comes with a 4.0-inch WVGA (800Ã—480) resolution based Amoled display, 1.4 GHz Snapdragon processor, Android 4.0, and 5 megapixel rear camera. It also has a 1400 mAh battery, 512 MB RAM, 1 GB of internal storage, and the usual connectivity options like WiFi, and Bluetooth.

The most notable features of the phone includes being water resistant; according to the company, it is even allows underwater photography with its camera. Also, its screen is scratch resistant. Another interesting feature is that the brightness and display of the handset adjusts automatically to the intensity of sunlight. And even the sound is automatically adjusted thanks to Motion Conscious Audio system which checks the environment and modulates the incoming voice to give clear voice quality. 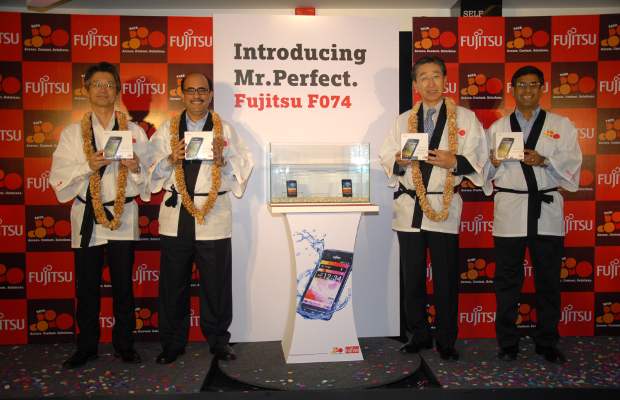 The smartphone has been priced at INR 21,900 and will be initially available to Tata Docomo customers across its brand stores in the country (initially Bangalore).

The F-074 smartphone is bundled with offer from Tata Docomo for both voice and data usage. Tata Docomo customers can avail free premium number for life, unlimited 3G data for three months (speed capped after 1 GB), unlimited Local and STD calls on any network, if they opt for the unlimited 899 GSM postpay plan on this Fujitsu smartphone.

For Tata Docomo customers who opt for any other postpay GSM plan, they can avail free premium number for life and 1 GB 3G data for three months. Tata Docomo prepay customers buying new Fujitsu Handset can recharge with FRC (first recharge coupon) of Rs 250 and get 1 GB data every month for two months.

In India and elsewhere in the world Japanese companies except Sony have not been able to make their presence felt despite having the most advanced features. Sharp forayed into India last year and failed miserably before them Panasonic was there in India, however they too exit the market even before the mobile boom happened in such a big way.

However since Fujitsu has entered in India through an operator, which in itself limits its customer base, but at least will get some operator support which can lead to some decent sales and brand awareness for Fujitsu.