Those who are looking for the best clock or weather or other similar widgets, tend to choose HD Widgets. Those mindful of the details would like the fact they have so many clocks to choose from.

HD Widgets, a customisable widget, has now been made available for smartphones with Android 2.1 or higher.

The app, made by Cloud.TV, has just recently been updated to make them work on smartphones.

Earlier, the HD Widgets app used to work only on tablets.

But the developers have now upgraded it to work on smartphones as well.

Since the same version now works on both tablets and smartphones, a user can download an app on both his smartphone and tablet by paying just once. 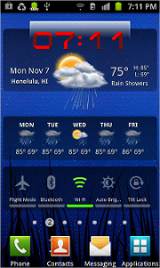 The HD Widgets can be used on high resolution screens on different devices.

At the same time, the company has made sure the app is not just for high resolution devices only so anything which runs Android 2.1 or higher can run it.

Obviously, some of the widgets may look different on smartphones, because there is not much space on the 4 inch screens compared to the tablets but the utility of the widgets remains the same.

Once the users have customised the widgets, the app will determine the location of the users automatically.

So if the users want to know something about the weather, they just need to tap the weather icon and the weather details would arrive on the full screen with all the details.

HD Widgets is available for download in the Android Market for $1.99.