The handset is based on the Android 7.1.1 Nougat operating system.

In the GeekBench listing, the Sony G8341 got 1909 points in single-core test and in multi-core test it received 6459 points. As per the listing on Geekbench, the Sony G8341 has 4GB RAM and Snapdragon 835 1.90 GHz octa-core processor. The handset is based on the Android 7.1.1 Nougat operating system. 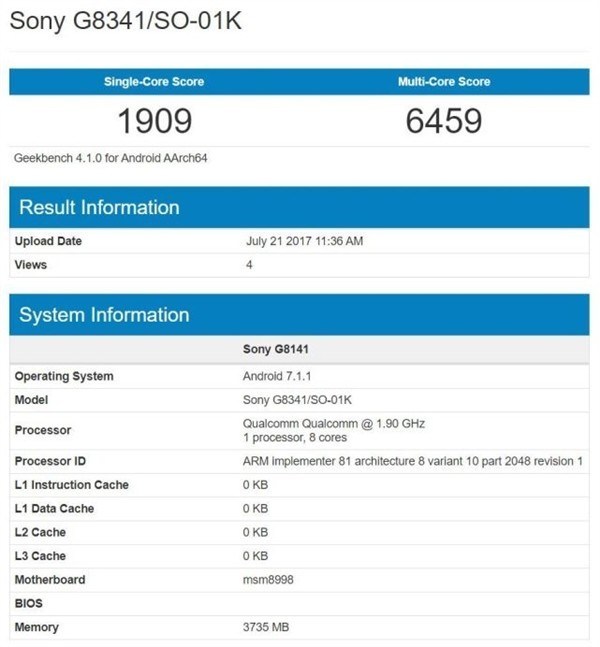 The Xperia XZ1 Compact with model number G8441 will be a smaller edition of the above-mentioned flagship device and will come loaded with the same processor and RAM. However, it will feature a 4.6-inch HD screen with a resolution of 1280 x 720 pixels and will be backed up by a smaller 2,800mAh battery.

Out of the Sony Xperia XZ1, Xperia XZ1 Compact and Xperia X1 smartphones, the first two smartphones will boast high-end specifications, while the third one will be more of a mid-range option. All the three smartphones are expected to be unveiled at Sony pre-IFA 2017 launch event on August 31, which will take place Berlin starting from September 1 to 6. Xperia X1 will be a mid-ranger and will sport a 5-inch HD display, will be powered by Snapdragon 660 chipset and will feature a 2,800mAh battery.