While the company remains tight-lipped about the arrival of the Xperia Z and Xperia ZL smartphones, we anticipate it to be priced alongside the high-end Android smartphones.

The new Sony Xperia Z was announced at the Consumer Electronics Show 2013 last month. The Xperia Z features a 5-inch LCD TFT touchscreen Reality display with 1920×1080 pixel resolution. Display is also powered by the Mobile Bravia Engine 2 that automatically optimises the images to make them sharper and brighter. This display engine is expected to deliver good quality contrast and colour management. 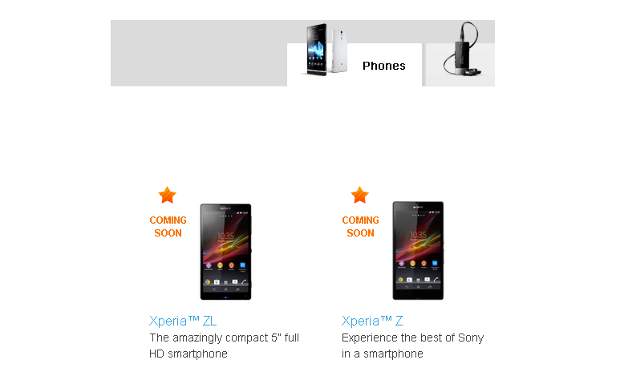 Under the 7.9 mm thick chassis of Xperia Z rests a quad-core 1.5 GHz Qualcomm Snapdragon S4 APQ8064 mobile processor with MDM9215M modem that supports even 4G LTE networks. However, it is not clearly whether the company will introduce LTE networks supporting Xperia Z model in India or not. Sony Mobile has packed 2 GB RAM to power the Android 4.1 Jelly Bean with TimeScape UI on the phone too.

The unique aspect of the Xperia Z is its capability to be resistant to water which is authenticated by the IPX5/7 certification while its dust resistance property is obvious from its IP5X certification. Meant for better durability, the Xperia Z certainly seems like one of those phones made for India. The company already offers similar durability features promising Xperia go in the mid-range segment.

At the rear, the Xperia Z has a 13 megapixel camera with Exmor RS image sensor supporting Auto Focus and LED Flash. In the front there is a 2 megapixel Exmor R image sensor based camera which is capable of holding full 1080p HD video chat.

The Xperia ZL has same features as the Xperia Z albeit without the water and scratch resistance properties. The Xperia ZL can hold up to 64 GB micro SD card and packs a non-removable 2370 mAh battery – the only two differences compared to the Xperia Z.