The GFX listing comes with model number G8341 and G8342, out of them G8342 is likely to be a dual sim variant. As per the listing on GFXBench, Sony Xperia XZ1 has a 5.1-inch display that has full HD (1920×1080 pixels) resolution and 5 finger gesture support. Besides as per the listing, it has 2.4GHz octa-core processor with Adreno 540 GPU. The smartphone has 4GB RAM and 64GB internal storage out of which 50GB is reserved for users. The Xperia XZ1 runs on Android 8.0 operating system. In the listing, there is no information about its battery or expandable memory. 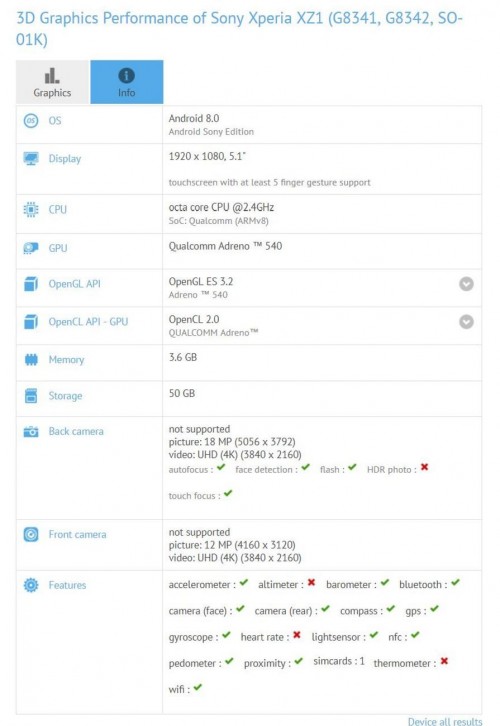 Further, the Sony phone is listed with 19-megapixel autofocus camera and a LED flash in its rear panel. There is a 13-megapixel camera in its front for selfies. The GFX listing shows that the device has connectivity features like Bluetooth, GPS, NFC and WiFi. As per the listing, the device has an accelerometer, gyroscope, light sensor and proximity sensor as well.

In the earlier GeekBench listing, the Sony G8341 got 1909 points in single-core test and in multi-core test it received 6459 points. As per the listing on Geekbench, the Sony G8341 has 4GB RAM and Snapdragon 835 1.90 GHz octa-core processor. The handset is based on the Android 7.1.1 Nougat operating system.

Sony is expected to unveil Sony Xperia XZ1, Xperia XZ1 Compact and Xperia X1 smartphones at Sony pre-IFA 2017 launch event on August 31, which will take place Berlin starting from September 1 to 6. Out of these three, the first two smartphones will boast high-end specifications, while the third one will be more of a mid-range option.

The Xperia XZ1 Compact with model number G8441 will be a smaller edition of the above-mentioned flagship device and will come loaded with the same processor and RAM. However, it will feature a 4.6-inch HD screen with a resolution of 1280 x 720 pixels and will be backed up by a smaller 2,800mAh battery. Xperia X1 will be a mid-ranger and will sport a 5-inch HD display, will be powered by Snapdragon 660 chipset and will feature a 2,800mAh battery.