Sony H8266 is rumoured to feature 5.48-inch full HD screen. It will be powered by Qualcomm Snapdragon 845 octa-core processor and 3210 mAh battery.

Sony is likely to launch Xperia Z series smartphones at the MWC event to be held in February next year. Recently, Sony H8216 surfaced online revealing its full specifications. Now another Sony smartphone with model number H8266 has leaked online. The Sony H8216 and H8266 are said to be different variants of the alleged Sony Xperia XZ2 phone smartphone. The Xperia XZ2 will be the successor to the Xperia XZ1 smartphone.

The Sony H8266 has been spotted on a GeekBench benchmarking website. The listing has spilt some beans on the expected specifications of the upcoming smartphone. 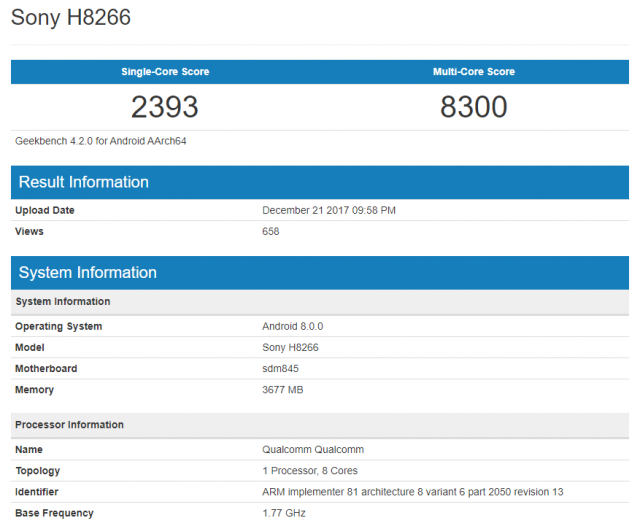 In the GeekBench listing, the Sony H8266 got 2393 points in single-core test and in multi-core test it received 8300 points. As per the listing on Geekbench, the Sony H8266 has 4GB RAM and Qualcomm Snapdragon 845 1.77 GHz octa-core processor. The handset is based on the Android 8.0.0 Oreo operating system.

Sony H8266 is rumoured to feature 5.48-inch full HD screen. It will be powered by Qualcomm Snapdragon 845 octa-core processor and 3210 mAh battery. On the software front, the phone will run on Android 8.1 Oreo operating system. It is said to have dual rear cameras of 12-megapixel sensors and a 15-megapixel front-facing camera. The Sony H8216/H8266 will be measuring 157 x 78 x 8.1mm and weighing 159 grams.

Note – The Lead images is for representational purpose only.