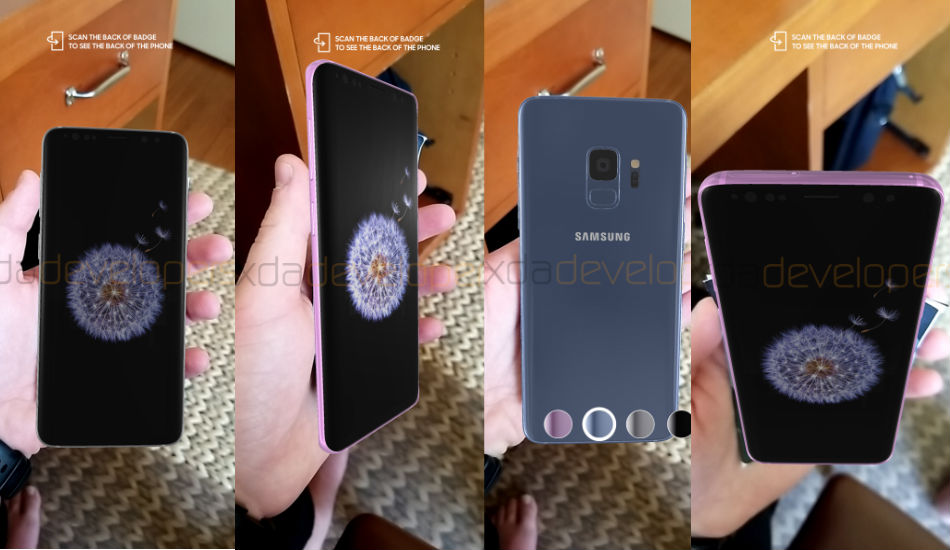 Samsung is all set to unveil its latest smartphones, the Galaxy S9 and Galaxy S9+, at an Unpacked event. It seems that Samsung is planning to use augmented reality in order to attract more attendees for the upcoming event.

The company has rolled a new application known as Unpacked 2018, which available fro download on Google Play. The app shows the countdown to the event. However, there is one thing particularly interesting about this app—it comes with AR feature. Through this one can view the latest flagship devices right from the app.

That said, folks at XDA Developers were able to decompile the app and they were able to find the 3D models of the upcoming Galaxy S9 and Galaxy S9+. This means that Samsung is planning to showcase the latest devices in AR. Further, the phones are reported to be available to the attendees once they scan their event badge.

The 3D models of the devices are in line with previously leaked renders and press images. The major changes in the Galaxy S9 duo come in the camera department. The Galaxy S9 will feature a 12-megapixel sensor with the variable aperture so that users will be able to switch between f/1.5 and f/2.4. The Galaxy S9+ will feature a dual-camera setup at the rear with a combination of two 12-megapixel sensors with one of them featuring variable aperture as mentioned above along with a secondary sensor with f/2.4 aperture. Both the sensors present in Galaxy S9+ and single rear camera in Galaxy S9 will feature optical image stabilization (OIS) and both of them will come loaded with laser and Dual Pixel autofocus. For the front, there will be an 8-megapixel camera with f/1.7 aperture and it will also feature autofocus feature.

The smartphones will be powered by Qualcomm Snapdragon 845 processor in the US and China, while the Samsung Exynos 9810 SoC will be available in other regions. The company’s in-house processor is based on 10nm process and features four cores clocked at 1.9GHz, while four high-performance cores are clocked at 2.9GHz. The European variant of the phones will come with 64GB of storage option, which can be expanded up to 400GB via micro SD card slot. The Galaxy S9 will feature a 4GB of RAM, while the Galaxy S9+ will be equipped with a 6GB of RAM.

Both the smartphones will run on the latest Android 8.0 Oreo, based on Samsung Experience 9.0. The Galaxy S9 is backed by a 3000mAh battery, while the Galaxy S9+ features a 3500mAh battery with wireless charging. The phones will come with IP68 certification making them water and dust resistance. Both of them will also feature an iris scanner, facial recognition and fingerprint sensor for security.