Samsung Galaxy Tab 4 will be introduced in three different models as usual.

Samsung, which last year launched a range of tablets under its Galaxy Tab 3 series, is now set to bring the Galaxy Tab 4 series. Actually, the South Korean manufacturer inadvertently listed Galaxy Tab 4 (10.1/8/7) tablets in the list of devices being compatible with the Galaxy Gear fit smartwatches.

The Galaxy Gear fit smartwatches – Gear 2 and Gear 2 Neo – are based on Tizen wearable mobile platform and were unveiled at the recently concluded Mobile World Congress 2014 in Spain. 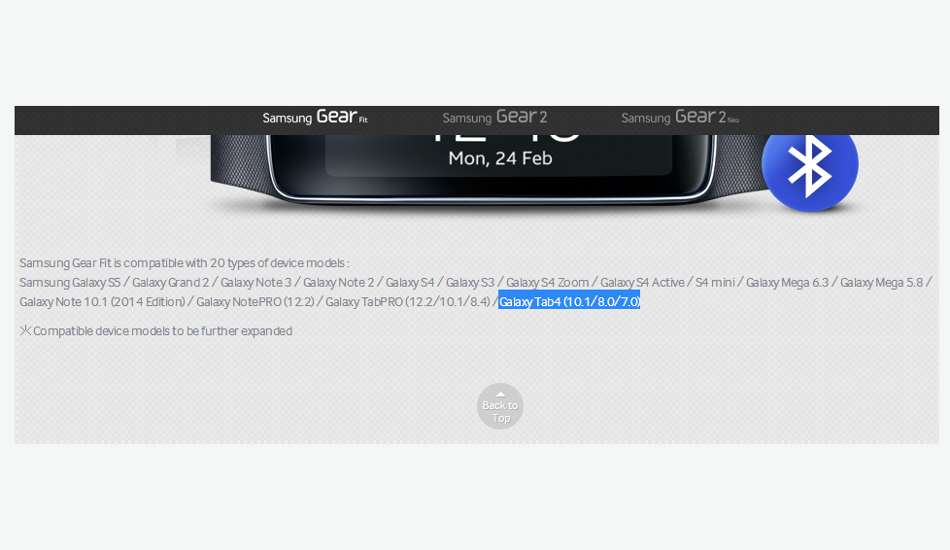 Just like last year, Samsung is expected to introduce the separate 4G LTE network supporting Galaxy Tab 4 models. We expect Samsung to introduce HD resolution support in the 7-inch Galaxy Tab considering its arch-rival, the Nexus 7 bears 1080p HD resolution support. Overall, the hardware specifications of the Galaxy Tab 4 series tablets will be iterative and nothing that can surprise the consumers. Since three years Samsung has been offering the tablets with 1280×800 pixel resolution natively. Samsung is expected to show the Galaxy Tab 4 models at the Computex 2014, which is scheduled to be held in Taipei, Taiwan, from June 3.