Samsung Galaxy Watch 5 series is all set to debut next week and we now have its specs, renders. 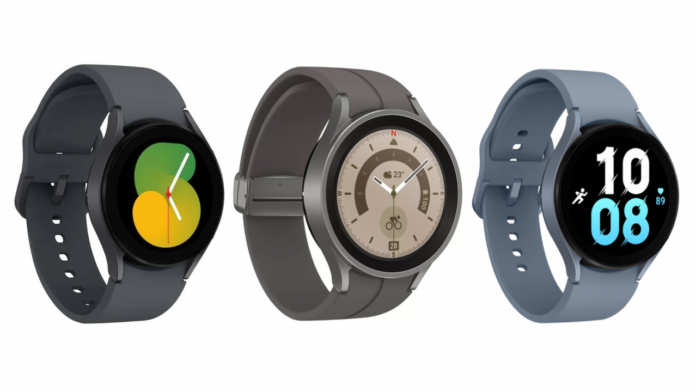 Samsung is all set to host its ’Galaxy Unpacked’ event next week for unveiling the Galaxy foldables. However, what comes along with the foldables is the Galaxy Watch 5 series, the specifications and renders for which, have now been revealed in full. The leaked information shows that the Watch 5 series could be more of an incremental upgrade rather than a major one.

The leak comes from WinFuture.de and as per the publication, the Galaxy Watch 5 will come in 40mm and 44mm sizes, whereas the Watch 5 Pro will be available in 45mm size. The main difference between the standard and Pro variants would be the titanium chassis, a larger display, and a bigger battery which will be limited to the Pro model.

The Samsung Galaxy Watch 5 will sport a 1.19-inch AMOLED display that will have a 396 x 396 pixels resolution while the Watch 5 Pro, will be coming with a bigger 1.36-inch AMOLED screen. It will have a resolution of 450 x 450 pixels and a layer of sapphire glass will protect the display of both models.

The Watch 5 Pro will be equipped with a 550mAh battery, which may last for up to 80 hours on a single charge. The Watch 5 40mm model could come with a 284mAh battery, whereas the 44mm variant should be backed by a 410mAh battery. The Watch 5 series will support up to 10W of wireless charging per the leak.

The Watch 5 lineup will offer up to 16 GB of storage. They should be powered by the same chip as last year’s Watch 4 models, which is Exynos W920. The LTE variants of the Watch 5 series will have e-SIM support and the series will also come with features like NFC, GPS, a heart-rate sensor, blood oxygen saturation tracker, and ECG.