Ahead of the official launch, renders and specs of the Galaxy Tab S7 and Galaxy Tab S7+ have been leaked online.

Samsung is all set to launch a new range of devices during its August 5 Unpacked event. The company is said to launch Galaxy Note 20 series along with new Galaxy Tab S7 tablets and more during the launch event. Now, ahead of the official launch, renders and specs of the Galaxy Tab S7 and Galaxy Tab S7+ have been leaked online.

The renders and specs were posted by WinFuture.de and it reveals that both of them will come with a similar design language. The tablets will be available in Mystic Black, Mystic Bronze and Mystic Silver colour options. 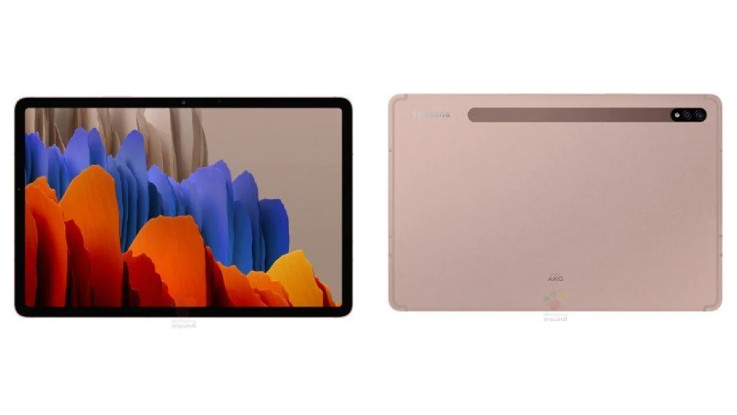 Both the tablets are reported to be powered by the latest Qualcomm Snapdragon 865+ processor along with Adreno 650 GPU. The devices are loaded with 6GB of RAM and 128GB of internal storage with an option to expand the storage up to 256GB via microSD card slot.

On the camera front, the Galaxy Tab S7 and Galaxy Tab S7+ are said to feature dual-camera setup with a combination of 13-megapixel primary lens with f/2.0 aperture and a 5-megapixel wide-angle lens with f/2.2 aperture. The tablets will come with an 8-megapixel selfie shooter. The tablets are said to come with S Pen with 9ms latency and air gesture support. It will come with a new keyboard cover with built-in trackpad and it will support DeX, just like its predecessor.

In terms of audio, the tablets will come with four speakers with AKG and Dolby Atmos and both of them runs on Android 10 with OneUI 2.0. The Galaxy Tab S7 will be loaded with a 7040mAh battery, while the Galaxy Tab S7+ will come with 10,090mAh battery with up to 45W fast charging support. On the connectivity front, both of them support Wi-Fi 802.11ax, Wi-Fi Direct, Bluetooth, GPS, GLONASS, Beidou, Galileo, ANT +, 5G, and USB Type-C port.