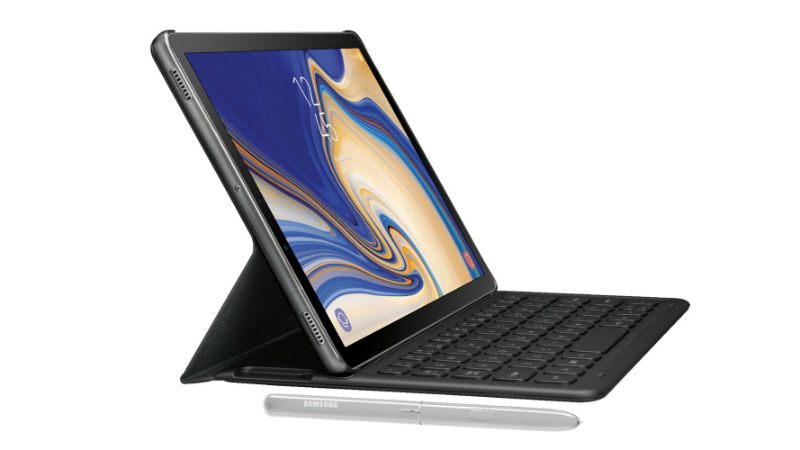 The new S Pen also seems to be a bit sleeker than the S Pen for Galaxy Tab S3. The back of the leaked render shared by Blass clearly shows the “Tuned by AKG” label, reflecting the great audio quality that could be possible from the 4 stereo speakers.

Samsung is prepping up for the launch of the Galaxy Tab S4 either in late August or early September after the Galaxy Note 9 announcement on August 9. Recently an official press render of the tablet surfaced online revealing the design details of the smartphone. And now a new render of the tablet has surfaced, thanks to popular leakster Evan Blass aka @evleaks.

The tipster has posted the Samsung Galaxy Tab S4 render in white colour. We can only see the black bezels and the optional black keyboard cover, but the back of the device features the white colour along with the white pen.

The earlier leaked render confirmed that black will certainly be one of the main colour options of the device. The camera is placed at the back of the device with LED flash. At the bottom, there is Samsung logo with “Tuned by AKG” branding. The power and volume buttons lie on the right side of the device.

The front of the device comes with slimmer bezels, a bigger display, and most notably, a lack of the physical home button. It shows elimination of the physical home button, as well as bezels that are the same size on all four edges. Samsung removed its logo from the front hints that the device will indeed boast an iris scanner on board instead of the fingerprint sensor.

As per earlier leaks, the Samsung Galaxy Tab S4 will feature a 10.5-inch QHD display with a resolution of 2,560 x 1,600 pixels and an aspect ratio of 8:5. It will have 4GB RAM and Qualcomm Snapdragon 835 1.90 GHz octa-core processor. The device will be based on the Android 8.1.0 Oreo operating system with Samsung Experience version 9.5 and 7300mAh battery. It will have a 13-megapixel rear camera with flash and an 8-megapixel front camera.