The Galaxy Tab S3 rumoured specifications include a 9.7-inch display with a resolution of 2048 × 1536 pixels.

Samsung is all set to launch the Galaxy Tab S3 at the Mobile World Congress (MWC) 2017 and the company is likely to bring as an S Pen accessory as well. Now, the latest leaked manual reveals some keys features of the upcoming tablet.

As spotted by Sammobile, the leaked images show that the device will come with a four stereo speaker setup with two speakers sitting at the base, while two at the top. The front device will feature physical home button which will also act as a fingerprint sensor flanked between recent and back keys, while at the top there is a light sensor and front camera. At the right, there will be a power on/off button, volume keys, SIM card/memory card tray and microphone, while the left will house a keyboard dock port. This is interesting and it seems that the company will place this device against the likes of iPad Pro and Microsoft Surface Pro 4. 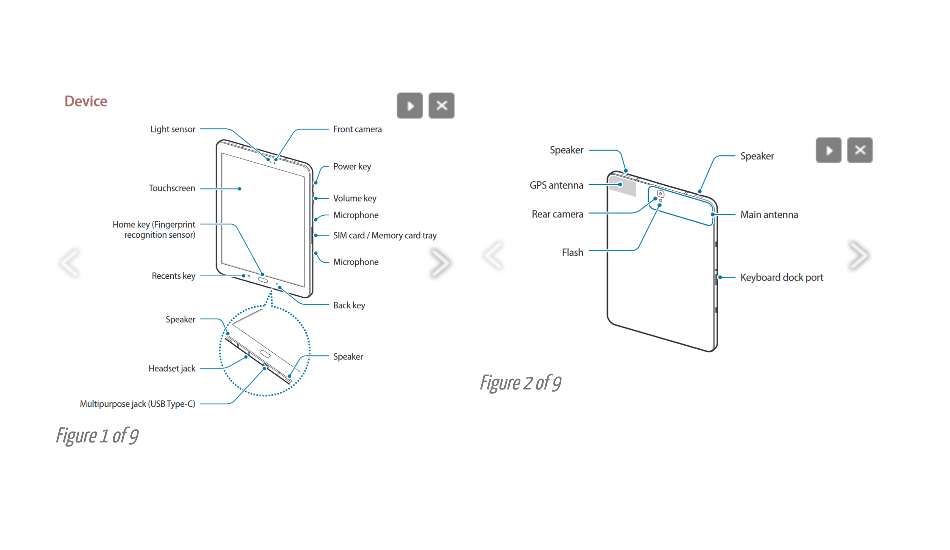 At the back, there will be a primary camera with flash while at the base you will find a USB Type-C. Now coming to the software side, the leaked screenshot also shows Secure Folder, Screen off a memo, Air command, which would be interesting to use. The image shows also an S Pen, and it seems that it will come with some type of nib and there is S Pen clip which would allow clipping onto something to keep it safe.

As for the specs are concerned, the tablet will come in two variants with SM-T820 and SM-T825 model numbers. While the former is said to be WiFi only, the latter is said to come with LTE support. The Galaxy Tab S3 rumoured specifications include a 9.7-inch display with a resolution of 2048 × 1536 pixels. We are not really sure if it will be an LCD panel or Samsung will yet again go for its trademark Super AMOLED display. Apart from this, the new Tab S3 is expected to be powered by a Snapdragon 820 chipset coupled with 4GB of RAM.

Samsung is also expected to give a 32GB or 64GB of internal storage which will be further expandable. The tablet is rumoured to come with a 12-megapixel rear camera coupled with a 5-megapixel front-facing camera. Also, we are likely to see Android 7.0 Nougat on board. As far as other specifications are concerned, we will keep you updated about the same as we head closer to the launch event.