Samsung was expected to introduce a new generation of tablets at the Mobile World Congress 2013 last month, but that didn’t happen. However, TheUnwiredView spotted a listing of Samsung Mobile Tablet GT-P8220 with LTE certification meant specifically for the Europe region. This is apparently part of the new Galaxy Tab 3 Plus tablets featuring 10.1 inch full HD resolution displays.

Samsung is quietly working to introduce third generation Galaxy Tab tablets with more exciting features to compete with the anticipated Apple iPad tablet. Likely to be branded as Galaxy Tab 3 Plus, the tablet will feature a 10.1 inch display with 2560 x 1600 pixel resolution. 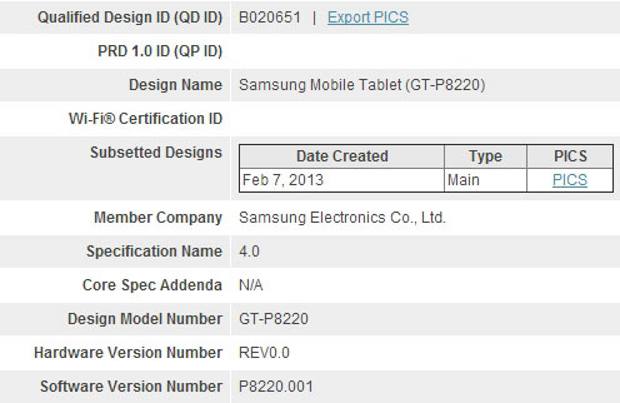 The Bluetooth SIG filing of the Galaxy Mobile Tablet GT-P8220 points at the LTE tablet model for Europe. The non-LTE version carries a GT-8200 model number. This tablet is rumoured to pack the new quad core 1.7 GHz Samsung Exynos 5 series mobile processor, and we can expect Samsung to add at least 2 GB RAM. The device will run Android 4.x Jelly Bean with the latest version of TouchWiz on top.

Whether this tablet will be similar or better than the current Samsung Google Nexus 10 can only be said after the new Galaxy Tab 3 Plus is announced.