Galaxy Note 8.0 arrives with the S-Pen stylus and several features specially crafted to support it. Featuring a 720p HD display, the Galaxy Note 8.0 joins the club with Note, Note II and Note 10.1 tablets – all with voice calling facility. The Galaxy Note 8.0 is a subtle take to compete with Apple iPad mini tablet coming in similar form factor. Samsung will make Galaxy Note 8.0 available worldwide in the second quarter of this year.

Samsung had clear plans to extend its Note line of products and also actively compete with its closest rival Apple on every front. The new slim Galaxy Note 8.0 arrives with a 8-inch TFT LCD display supporting native 1280×800 pixel resolution. So the tablet is HD ready and will let you enjoy the high quality multimedia on it. The S-Pen has been embedded on the Galaxy Note 8.0 tablet. When the S-Pen is pulled out, the tablet automatically detects the stylus and actives the S-Pen supporting menus as well as apps. 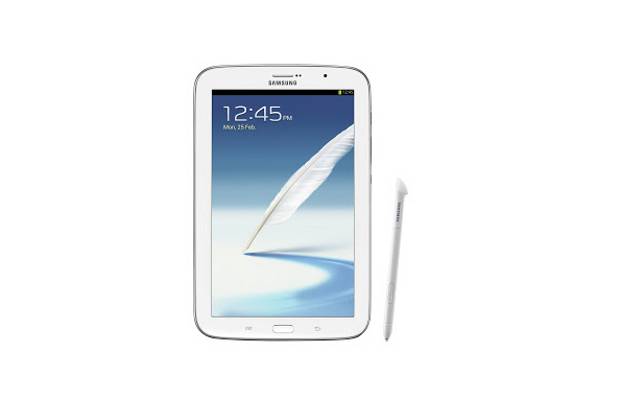 Samsung has gone a step ahead on S-Pen with the new Air View where in the user can simply hover the stylus in front of the screen to see previews of different apps. There are several applications such as S Planner, Awesome Notes, Page Notes and multiple apps specially optimized to be used with the S-Pen for improving productivity.

Under the slim chassis, Galaxy Note 8.0 integrates a quad-core 1.6 GHz ARM Cortex-A9 based mobile processor paired with 2 GB RAM. The Galaxy Note 8.0 will come in 16 GB and 32 GB models – both with a memory card slot supporting up to 64 GB micro SD card. Samsung will offer this tablet in Wi-Fi Only and Wi-Fi+3G model options.

The Galaxy Note 8.0 features a 5 megapixel camera at the back with LED flash to click high quality images and also record HD videos. There is also a front facing camera to engage in a video chat using select apps or click self-portrait images.

Samsung has added a dual-band Wi-Fi (802.11 a/b/g/n) support to have 2.4 GHz and 5.0 GHz bands compatibility on this tablet. Also there is Wi-Fi Direct feature to connect the device with other smartphone/tablet. The Wi-Fi+3G version of the Galaxy Note 8.0 will feature GPS module with A-GPS and GLONASS support for more accurate and quicker location locking profiles.

Samsung Galaxy Note 8.0 features Android 4.1.2 Jelly Bean with a layer of TouchWiz and L!ve Panel user experience. With several pre-installed Premium Suite of S-Pen applications, the tablet is powerful productivity booster out of the box. To make the tablet run for long time, Samsung has packed a 4600 mAh battery and there is a micro USB 2.0 port to charge it.

Samsung has not announced the price of the Galaxy Note 8.0 but is expected to release in second quarter of this year starting from select markets. By the time Galaxy Note 8.0 is available in India, we do anticipate announcement of the second generation iPad mini tablet with better specifications and features from Apple.