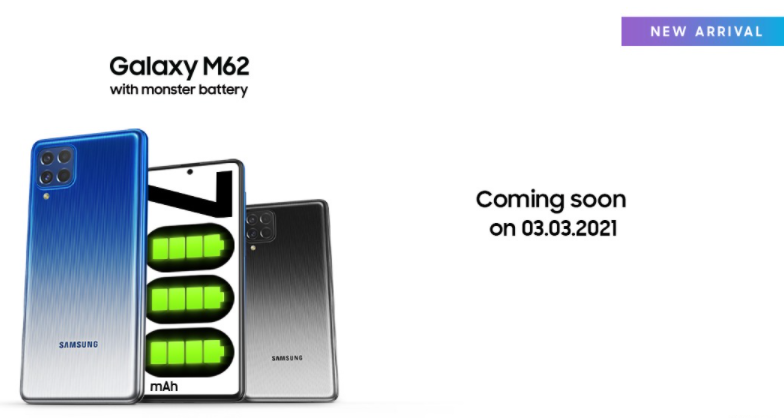 The Samsung Galaxy M62 is backed by a 7,000mAh battery and supports 25W fast charging.

Samsung has silently launched Galaxy M62 in Thailand and the phone is now listed on the company’s website. The pricing details for the Samsung Galaxy M62 has not been revealed by the company yet.

Samsung Galaxy M62 smartphone will be announced in the Malaysian market on March 3. The Galaxy M62 is the rebranded version of the Galaxy F62 that launched in India recently.

The device is powered by a 7nm Exynos 9825 chipset and Mali G76 GPU. The phone has 8GB of RAM and 128GB/256GB of internal storage, expandable up to 1TB via micro SD card.

For the camera, there will be a quad-camera setup with a 64-megapixel primary sensor, a 12-megapixel secondary camera, and two 5-megapixel lenses with an f/2.4 aperture. For the front, the hole-punch cutout will house a 32MP camera for selfies.

The phone features a side-mounted fingerprint scanner. It runs on Android 11 based OneUI 3.1 out of the box.