In some markets, it is expected that Galaxy J6 Plus will be launched as the Galaxy J6 Prime.

Samsung is working on its upcoming Samsung Galaxy J6 Plus and Galaxy J4 Plus smartphones. Now out of these two, the Galaxy J6 Plus with the model number SM-J610G has received (Federal Communications Commission) FCC certification. It means that the launch of the said device in the United States is imminent.

The FCC document, however, does not reveal anything about the specifications of the Galaxy J6 Plus. It reveals that the phone may have a dual-SIM card slot and that the handset will have some connectivity option like 2.4GHz Wi-Fi, Bluetooth, 2G/3G/4G network. 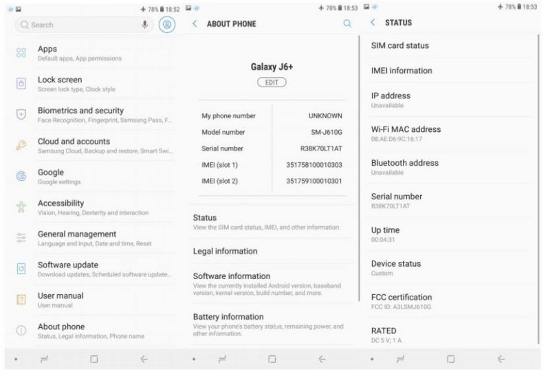 In some markets, it is expected that Galaxy J6 Plus will be launched as the Galaxy J6 Prime. Recently, two Samsung devices with the model number SM-J610F and SM-J415F received Bluetooth certification which are said to be Galaxy J6 Plus and Galaxy J4 Plus respectively. The Galaxy J6 Plus was listed to come in single and dual-SIM variants.

Earlier Samsung Galaxy J6 Prime was also spotted on the Samsung India website indicating its Indian launch soon. WiFi certification from the WiFi Alliance (WFA) of the phone revealed that the Galaxy J6 Prime will support Wi-Fi 802.11 b/g/n connectivity with 2.4GHz and 5GHz frequency and it will run on Android 8.1 Oreo operating system.

As per rumours, the Samsung Galaxy J6 Plus will be powered by Snapdragon 450 SoC with Adreno 506 GPU. The smartphone will feature a 5.6-inch display with an aspect ratio of 18.5:9 and a resolution of 1,480 by 720 pixels. It will reportedly come with a 4,350mAh battery and will sport a dual rear-camera setup and a single front-facing camera.