As per the Wi-Fi certification, the Samsung Galaxy C7 (2017) will support single-band Wi-Fi a/b/g/n (2.4GHz) and Wi-Fi Direct connectivity features. Sadly, the listing does not show any specifications except that the device will be powered by Android 7.1 Nougat operating system. The listing carries the certification ID WFA71982 and the date of certification being 30th June 2017. 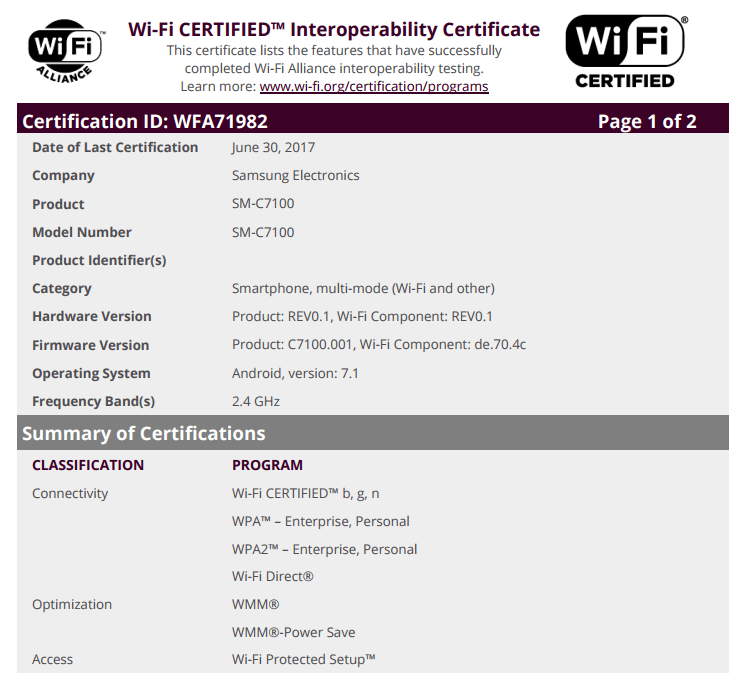 Sadly, no more details about the phone are known at the moment but since now the device has started surfacing online we expect more leaks to come up in the coming days. We will keep you posted once we get more updates on this.

The Samsung Galaxy C7 (2017) will be successor of Samsung Galaxy C7 which was launched last year in June. To recall, the Samsung Galaxy C7 offers a 5.7-inch display with full HD (1920 x 1080 pixels) Super AMOLED display. It is powered by a 2 GHz octa-core Snapdragon 625 processor and Adreno 506 GPU. The phone has 4GB RAM, 128GB expandable memory slot, Android 6.0.1 Marshmallow operating system and a 3,300 mAh battery with Qualcomm Quick Charge 3.0. The device also features a fingerprint sensor on the home button.

Share
Facebook
Twitter
WhatsApp
ReddIt
Previous articleSamsung Galaxy Note 8 will be available in 64GB and 128GB variants: Report
Next articleMoto C Plus is up for grabs for Rs 499 with Flipkart Exchange Offer, but there is a catch!
RELATED STORIES