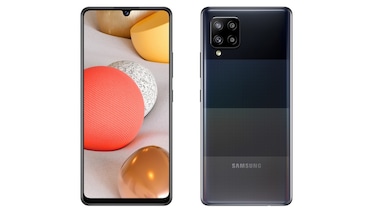 Samsung has launched a bunch of new devices at its virtual event which includes 3 new devices. Take a look at the details here.

Samsung, the Korean giant has revealed a bunch of new devices in its ‘Life Unstoppable virtual event.’ Amongst these devices, is a new phone that will be Samsung’s cheapest 5G device yet.

The new Samsung Galaxy A42 5G is the latest addition to Samsung’s mid range lineup.

Though, all the specifications of the device haven’t been revealed, Samsung still has confirmed some of them. It said that the device will have quad-camera setup at the rear and will come with a 6.6-inch OLED screen. According to the rumors, the cameras will include a 48MP main sensor and a 5MP depth sensor. It is said to be powered by the Snapdragon 690 paired with 4GB of RAM and 64GB or 128GB of Storage. The renders also show that there will be a water-drop style notch at the front.

The phone is also expected to have a 5,000mAh battery.

Alongside this device, Samsung has also launched 2 new devices where one of them is a wireless charger that can charge multiple devices (upto 3 devices) at once, and also a brand new Tablet called the Galaxy Tab A7. The Tab A7 has a 10.4-inch display and comes with 4 speakers that have Dolby Atmos Support.

Samsung also launched Tab S7 tablets at the ‘Unpacked’ event where it launched the Note 20 and Note 20 Ultra.