Samsung Galaxy A40 will be a mid-range smartphone from the company which will sit between the Galaxy A30 and the Galaxy A50.

Samsung recently launched Galaxy A50, Galaxy A30 and Galaxy A10 smartphones in India. Now the company is also working on another A-series smartphone, dubbed as Samsung Galaxy A40. The smartphone has now received WiFi certification from the WiFi Alliance (WFA).

The Wi-Fi certification, first spotted by DroidShout, reveals that the Samsung Galaxy A40 will support dual-band Wi-Fi a/b/g/n (2.4GHz, 5GHz) and LTE capabilities. Sadly, the listing does not show any specifications except that the device will be powered by Android 9.0 Pie operating system. The listing carries the certification ID WFA81968 and the date of certification being 6th March 2019. 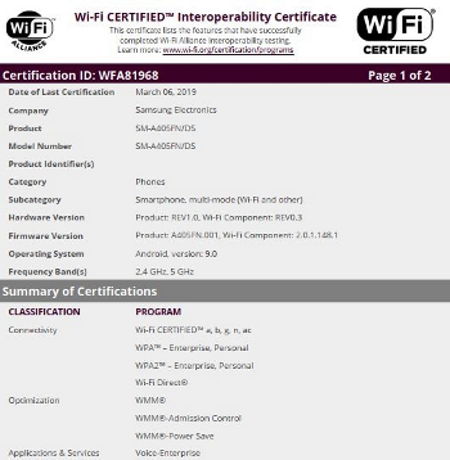 As per a recent report, Galaxy A40 will carry a price tag of Euros 249 (around Rs 20,047) in Europe. The report, however, does not reveal the exact date of its launch, but it's reported to go on sale in Europe soon.

As the name suggests, the Samsung Galaxy A40 will be a mid-range smartphone from the company which will sit between the Galaxy A30 and the Galaxy A50. The smartphone is likely to feature the same 6.4-inch Infinity-U Super AMOLED display with 1080 x 2340 Full HD+ resolution and a 19.5:9 aspect ratio.

Under the hood, the smartphone might be powered by the 14nm Exynos 7904 octa-core chipset coupled with 4GB of RAM and 64GB of internal storage. Similar to the other new A-series smartphones, the Galaxy A40 will include a dedicated microSD card slot for further storage expansion up to 512GB. It will come with Samsung’s new One UI based on Android Pie. Details about the camera resolution and battery are unknown at the moment.

An earlier GeekBench listing revealed that the phone will feature Exynos 7885. The octa-core chipset is accompanied with 4GB RAM. As for the software, the phone is running on Android Pie out of the box