Samsung Galaxy A40 features Exynos 7885. The octa-core chipset is accompanied with 4GB RAM.

As per the listing, the Samsung Galaxy A40 features Exynos 7885. The octa-core chipset is accompanied with 4GB RAM. As for the software, the phone is seen to be running on Android Pie out of the box.

The Samsung Galaxy A40 scored 1,322 points on the single-core test while in multi-core test the handset scored 3,987 points. The Galaxy A40 is expected to have Infinity AMOLED display panel. A dual cameras setup is also expected on the rear side. 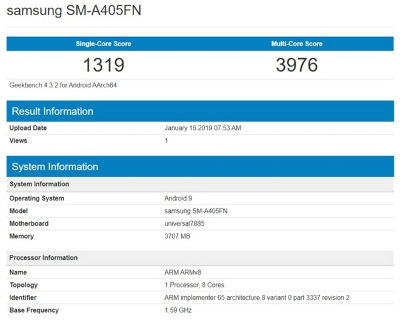 Apart from the Geekbench listing, the Galaxy A40 availability for a number of European countries has also been revealed. As per the report, the Galaxy A40 will be released in France, Scandinavia, Germany, Netherlands, and UK.

As of now, the launch date or availability details are not known for any of the new Galaxy A phones. However, since both the Galaxy A40 and A50 are being tested with Android Pie, a launch could be expected soon.