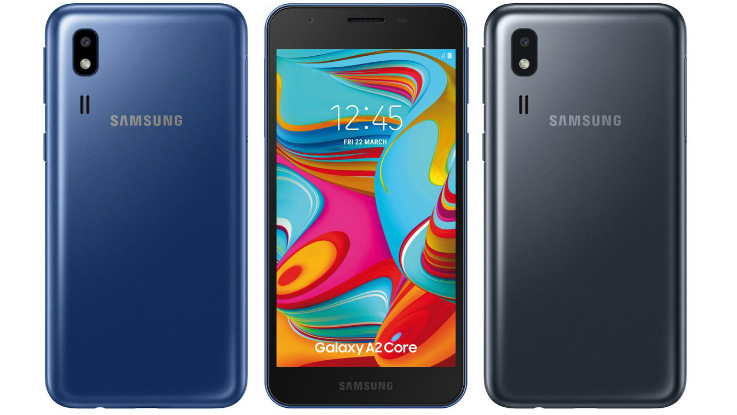 The Samsung Galaxy A2 Core Android Go smartphone will be available in Blue and Black colour.

The renders were shared by a known tipster Evan Blass and it reveals that the smartphone will be available in Blue and Black colour. The renders reveal that the phone will be made of plastic and the front panel comes with a thick chin with Samsung written on it. The top bezels are thick as well and it houses earpiece, front-facing camera and more.

The right side of the device is equipped with a volume controls and power on/off button, while the left is bare. The back panel of the phone features a single-camera setup at the top-left corner along with LED flash and just beneath it, you will find oddly-positioned speaker grille. That said, there is no information about the specifications, price and availability of the said smartphone. We suggest you stay tuned with us for further details.

Meanwhile, Samsung has introduced two smartphones with Android Go programme, namely Galaxy J4 Core and Galaxy J2 Core. The Samsung Galaxy J4 Core sports a 6-inch HD+ display with 720×1480 pixel resolution and an 18:9 aspect ratio. The phone is powered by 1.4Ghz quad-core Exynos 7570 processor coupled with 1GB of RAM. The device comes with 16GB of internal storage and an expandable memory up to 512GB via a microSD card.

The Galaxy J2 Core features a 5.0-inch qHD display with a screen resolution of 960 x 540 pixels. The phone is powered by the company’s in-house quad-core Exynos 7570 chipset. The phone is backed by a 1GB of RAM and 8GB of internal storage.