The upcoming Samsung Galaxy A12 will be powered by MediaTek helio P35 chipset which will be coupled with 3GB RAM.

Samsung is working on the company’s next A series of smartphone which is dubbed as Samsung Galaxy A12. Now the phone has been spotted on Geekbench revealing its chipset, RAM, and software.

As per the Geekbench listing, the upcoming Galaxy A12 will be powered by MediaTek helio P35 chipset which will be coupled with 3GB RAM. However, there could be other RAM variants as well.

For the software, the phone will run Android 10 operating system. The phone has scored 169 in single-core and 1,001 in multi-core benchmarks. 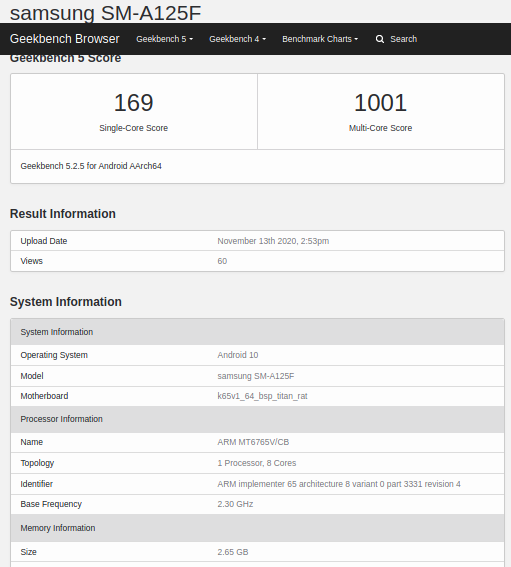 Samsung Galaxy A12 will have the same LCD display and triple camera system as its predecessor. The phone will also feature a capacitive fingerprint sensor and touted to feature a larger battery than the Galaxy A11’s 4,000mAh battery.

To recall, Samsung Galaxy A11 features a 6.4-inch HD+ Infinity-O Display with 720 x 1,560 pixels resolution and a 19.5:9 aspect ratio. The phone is powered by the 1.8GHz So coupled with up to 3GB of RAM and 32GB storage. The phone is backed by a 4,000mAh battery with 15W fast charging support. The phone has a triple camera setup with 13-megapixel main lens an f/1.8 aperture, 5-megapixel ultrawide sensor with f/2.2 aperture and 2-megapixel depth sensor with f/2.4 aperture. The punch-hole selfie camera in the top left has 8-megapixel sensor with f/2.0 aperture.