Samsung Flip launched: Can it take on Google Jamboard and Microsoft Surface Hub 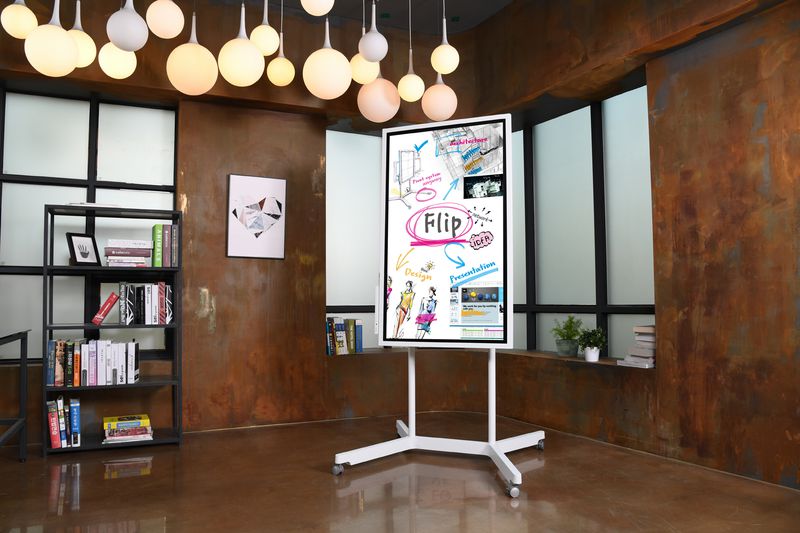 With the recent launch of the Samsung Flip, who’s to gain from the Indian enterprise market? Could the Jamboard and Surface Hub still handle the competition?

Samsung India just introduced the Samsung Flip as the company’s take on a Digital Whiteboard display which was first showcased at the Consumer Electronics Show at the start of the year. The Flip will come in handy for enterprise-minded users where the device could be used to make presentations and conduct team discussions and meetings. With the release of the Flip, Samsung looks to be competing with the likes of Google and Microsoft to capture the Indian market.

Starting with the newest player in the game, Samsung’s Flip sport a 55-inch eLED display with a resolution of 3840×2160. The Flip is powered by a 1.7GHz CA72 processor with 3GB of RAM and a 10W dual-speaker system. The digital whiteboard is made so as to be viewed across all throughout the room with its 178-degree viewing angle. The machine allows up to 4 users who’ll be able to doodle on the display at the same time, all of which can be cast on a smartphone or a PC. In terms of connectivity, the Flip has NFC as well as HDMI in addition to the basic USB 2.0 port, WiFi, Bluetooth and a wooden pen for a stylus.

Google’s Jamboard which went on sale during summer last year is an older alternative to the Flip and also flaunts a 55-inch Ultra-HD 4K display but the interactive display is smooth as real with the improved 120Hz touch scan rate of the display. In addition to that, it boasts of an inbuilt wide-angle HD camera which can be made use for conferencing across offices. The Jamboard has all the connectivity options of Samsung’s Flip with the addition of USB 3.0 and USB Type C as valuable extras. It also features the newer HDMI 2.0 for enhanced video and audio transmission.

Of the three devices in question, Microsoft’s Surface Hub is by far the most expensive option but that we’ll talk about a little later. Like the Jamboard and the Flip, the Surface Hub has a 55-inch 16:9 HD display but there’s also an 84-inch variant, with the latter being the only featuring a 4K screen. The Hub is powered by 8GB of RAM and 128GB of onboard SSD storage with dual 1080p cameras on the front. The viewing angle is a tad bit lower than Samsung’s Flip on a 100-degree angle with ambient light and passive infrared presence sensors.

Microsoft’s digital whiteboard device comes with two included Surface Hub Pens though Google offers an additional mouse-like stylus as an eraser. Samsung is yet to reveal if there are any additional accessories in the package. It remains to be seen how the Korean electronics giant plans to tackle its competition. Could it be on the basis of the provided accessories or the software integrated with them? While it appears to be Samsung’s own Tizen OS running on the Flip, it still would have a long way to go considering the fact that Google and Microsoft already have robust operating systems(Android Marshmallow and Windows 10 team) and a plethora of services to persuade enterprise users to opt for them.

Another significant game-changer could be the pricing of the three digital whiteboards. While Google is selling its Jamboard for $4,999 (approx. Rs 3,26,000) though not in India as of yet, Samsung India has already made the Flip available for Rs 3,00,000 (approx $4,600). This is where Microsoft would suffer a setback as even the cheaper 55-inch variant of the Hub costs a whopping $8,999 (approx. Rs 5,86,000), not to forget the 4K enabled 84-inch version which would strip you off by $21,999 (approx. Rs 14,34,000). On a lighter side, a more sensible alternative would be to buy a whiteboard and have everyone present at the team meeting.