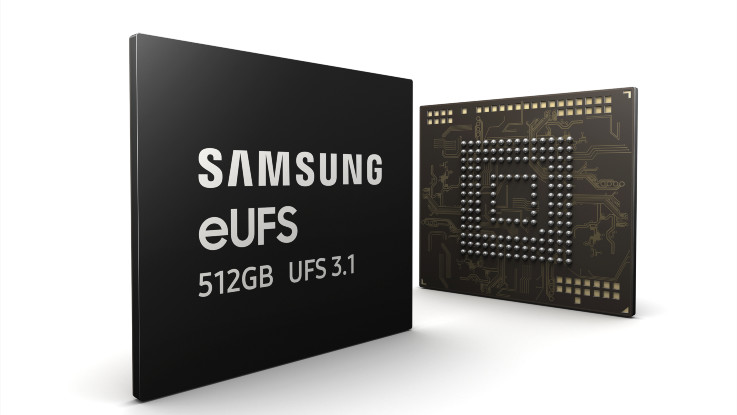 Samsung Electronics has announced that it has begun mass production of industry’s first 512 GB of eUFS (embedded Universal Flash Storage) 3.1 for its upcoming flagship smartphones. Samsung began volume production of fifth-generation V-NAND at its new Xi’an, China, line (X2) this month to fully accommodate storage demand throughout the flagship and high-end smartphone market.

Samsung claims that the latest storage offers three times the write speed of the previous 512GB eUFS 3.0 storage option. The latest eUFS 3.1 offers sequential write speed of over 1,2000MB/s, which the company claims is twice the speed of a SATA-based PC (540MB/s) and over ten times the speed of a UHS-I microSD card (90MB/s). This means that one can transfer content from an old smartphone to a new device in less time as compared to its predecessor.

The company says that phones with eUFS 3.1 will take 1.5 minutes to move 100GB of data, while the UFS 3.0 takes more than four minutes. In terms of random performance, the 512GB eUFS 3.1 processes up to 60 per cent faster than the widely used UFS 3.0 version, offering 100,000 input/output operations per second (IOPS) for reads and 70,000 IOPS for writes.

“With our introduction of the fastest mobile storage, smartphone users will no longer have to worry about the bottleneck they face with conventional storage cards,” said Cheol Choi, executive vice president of Memory Sales & Marketing at Samsung Electronics. “The new eUFS 3.1 reflects our continuing commitment to supporting the rapidly increasing demands from global smartphone makers this year.”