Samsung is working on its first Android Oreo (Go Edition) smartphone which is expected to be named as Galaxy J2 Core. Recently live images of the smartphone were leaked online revealing some key information. And now the smartphone with model number SM -J260G/DS has received WiFi certification from the WiFi Alliance (WFA).

As per the Wi-Fi certification first spotted by SamMobile, the Samsung Galaxy J2 Core will support single-band Wi-Fi a/b/g/n (2.4GHz) and LTE capabilities. Sadly, the listing does not show any specifications except that the device will be powered by Android 8.1 Oreo operating system. The listing carries the certification ID WFA78400 and the date of certification being 5th July 2018. 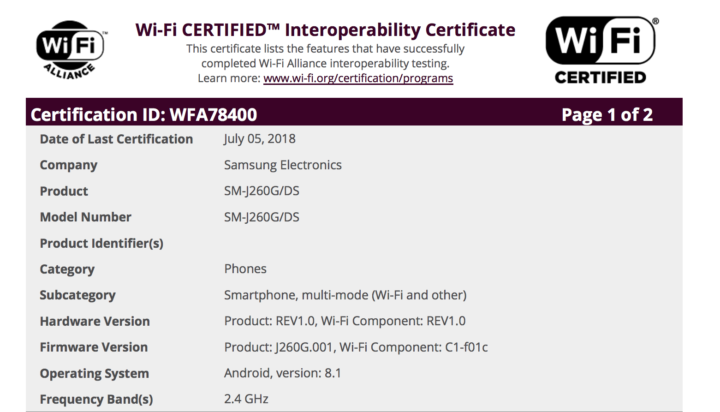 Samsung has not officially announced the time frame for the launch of its Android Go smartphone but since the device has started taking the rounds online we expect more leaks to come up in the coming days. We will keep you posted once we get more updates on this.

Previously, key specs of the upcoming Android Go smartphone were leaked online. The smartphone will feature a 5.0-inch Super AMOLED display, though the resolution is not at the moment. The phone will be powered by 1.4GHz quad-core Exynos 7570 processor and it will be backed by a 1GB of RAM and 16GB of internal storage, which could be expandable in nature. In terms of optics, the phone will feature an 8-megapixel rear camera and a 5-megapixel selfie shooter.