Both the Dual SIM phones comes in vibrant colour, 2.2 inch screen, and a Wireless speaker along with other music centric features.

The handset has a ‘Party Light’ feature that makes the handset glow during the music playback (based on the type and mood of the song). The phones come in four vibrant colours – Midnight Blue, Fiery Red, Grayish Black and Tangy Orange.

The company claims that the phones are loaded with a software that enhances the music/ audio processing coupled and comes with Spice wireless speakers & stereo earphones.

Both the phones support Dual SIM function. The Samba sports a 2.2 inch QVGA screen with multitap keypad, while the Carnival has a QWERTY key pad and a broad 2.2 inch screen.

Both the phones sport a 1.3 megapixel shooter that can also capture and play videos. Other features include expandable memory upto 8 GB with a Free 2 GB Memory card, FM with recording, 950 mAh battery with claimed talk time of 4 hours and a 3.5mm audio jack. 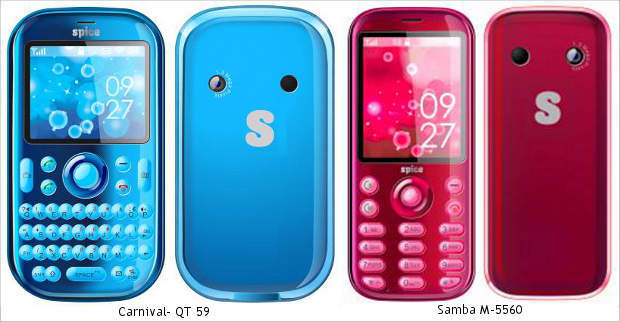