Reliance JioTV has been pulled down from the web 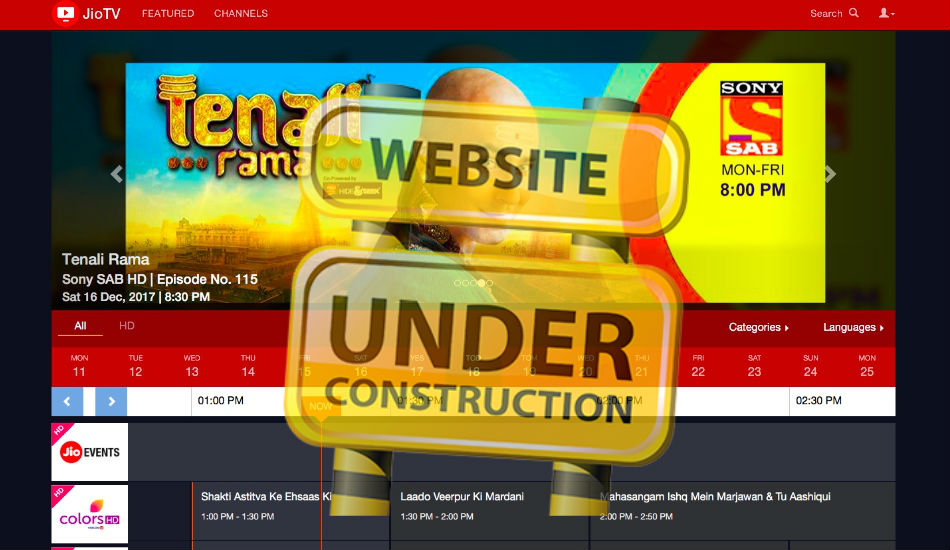 it seems that the website has been brought down by the brand and it now shows under construction message.

Just yesterday we reported that Reliance JioTV is available on the web. However, it seems that the website has been brought down by the brand and it now shows under construction message.

According to a report by Telecom Talk, the website has been pull down due to some ‘Technical Litigation’ issues. The information was obtained by Jio’s Priority care team. The report further highlights that there is no estimated time on when the website will be back online. The team also added that it might take from three months or even one whole year for Jio TV website to come online.

This is a sad news for Reliance Jio users who want to stream their favourite shows and channels on PC and laptop. We will keep you posted on the latest update on this issue. The website gave an option to users get to view different channels along with featured content and more. Users can also watch previous episodes and shows, similar to what we have seen in the application. As for the JioTV app is concerned, it is already available for Android and iOS platforms.

Reliance Jio TV offers access to over 350 channels and past 7 days aired shows. The app offers TV channels in English, Hindi and other regional languages. One can also set reminders for different shows and lock their screen for zero disturbing once the show is on. Users can also Pause/Play Live coverage and the shows can also be played on Mini-Player which is a lot similar to YouTube.

Previously, the brand also introduced the web version of its JioCinema app. Users can go to JioCinema website and log in to watch their favourite movies and more. The app claims to have a collection of over 1 lakh+ hours of HD content which include movies, music videos and popular TV shows. You can also create your own ‘Watchlist’ and resume playing from where you left. There is also an option for Dock Player which lets users browse side by side while watching the content.