This add-on Cricket pack comes with a validity of eight days and has a data cap of 2 GB per day.

In March this year, Jio offered 10 GB of free data to all its subscribers. Now the Mukesh Ambani-led telco is reportedly offering 8 GB of free data to its users. This add-on Cricket pack comes with a validity of eight days and has a data cap of 2 GB per day.

If you go to the My Jio app and then click on Plans tab, you will see the message for the additional data. In our case, there was no message for 8 GB but it simply showed “Cricket Pack” under my current plan tab with a limit of 2 GB. 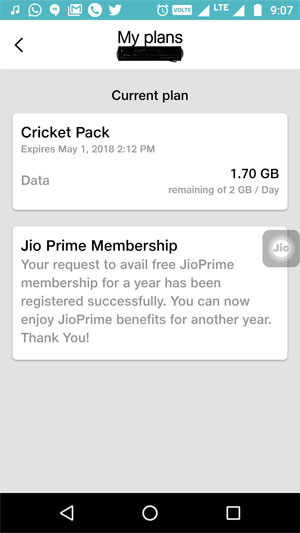 The free Jio data was understandable. With IPL series underway, this free data will help Jio get more users on its JioTV app in which one can watch the matches live. The telco has a Cricket Season Pack too. Under this, it is offering 102 GB of data with 51 days of validity for Rs 251.

Jio has consistently been announcing offers and deals to grow its user base. Just a day back it announced an exchange offer for JioFi devices under which it was offering the dongle for just Rs 999 in exchange for any old one. Along with that, it is offering Rs 2200 cash back to the JioFi buyers.

The cashback will be then credited to the users’ MyJio account in the form of 44 vouchers of Rs 50 each. These vouchers can be redeemed in future recharges on the JioFi for Rs 198 and Rs 299 only. The JioFi M2S comes with a battery backup of 2300mAh battery and it can connect up to 10 devices through WiFi.

Not surprisingly, Jio managed to get 186.6 million users by the end of March this year, taking its market share to 15.3%. Airtel still has the No 1 position with 25.6% market share.