Redmi Note 11T 5G will launch in India soon. The same device is said to launch as the Poco M4 Pro 5G in the global market on November 9. 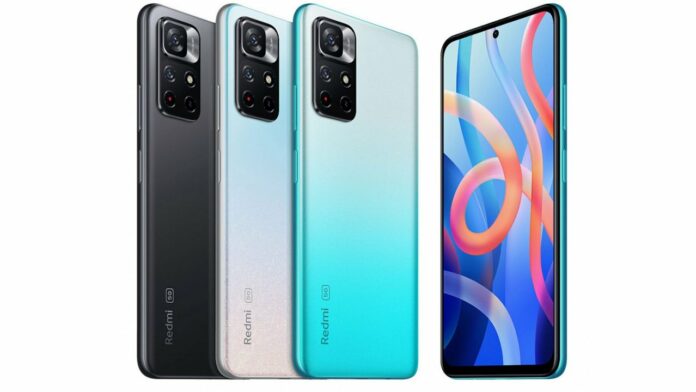 The news comes from a source code finding by tipster Kacskrz Skrzypek (@kacskrz). The source code has revealed that the Redmi smartphone might launch in India as Redmi Note 11T 5G.

The Redmi Note 11 5G in the Note 11 Pro series is expected to launch as Poco M4 Pro 5G outside China. Poco has already announced that it will unveil a new M-series smartphone globally this month.

Poco M4 Pro 5G will be announced on November 9. The phone will be launched on November 9 at 8pm GMT+8 (5.30pm IST). It will be a virtual launch event, and the launch will be live-streamed via Twitter, YouTube, and Facebook.

The same tipster recently revealed that Redmi Note 11 Pro and Note 11 Pro+ will launch in India as Xiaomi 11i and Xiaomi 11i HyperCharge. Further, he also revealed that these Redmi smartphones wouldn’t be rebranded for the Global markets. So the change is only for India.

Redmi Note 11 sports a 6.6-inch full-HD LCD display with a 90Hz refresh rate. Further, it is powered by the MediaTek Dimensity 810 SoC and gets up to 8GB RAM and 128GB of internal storage.

Redmi Note 11 has 33W fast charging and is backed by a 5,000mAh battery. Connectivity options include a 3.5mm audio jack, USB Type-C port, dual-band Wi-Fi, Bluetooth, GPS and more. Same as the Pro models, this one is also IP53 rated.