Poco M4 Pro 5G to be announced on November 9 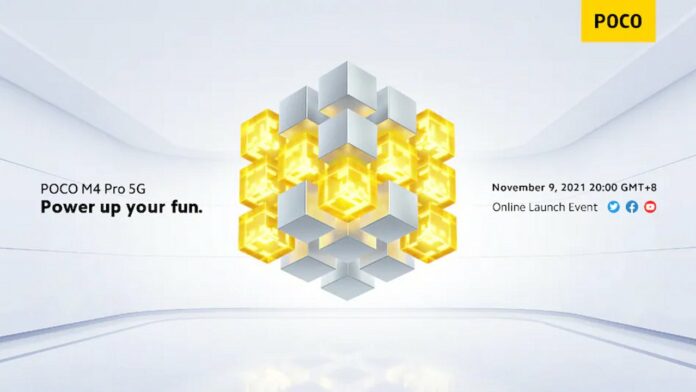 Poco has announced that it will unveil a new M-series smartphone globally next month. The company has confirmed that Poco M4 Pro 5G will be announced on November 9.

Poco Global in a Twitter post has confirmed the arrival of the Poco M4 Pro 5G. The phone will be launched on November 9 at 8pm GMT+8 (5.30pm IST). It will be a virtual launch event and the launch will be live streamed via Twitter, YouTube, and Facebook.

Poco M4 Pro 5G is being teased by the company with a tagline “Power up your fun”. But the poster does not reveal any info on the specs of the upcoming smartphone.

The phone was recently spotted on Geekbench benchmarking website with a model number 21091116AC. As per the listing, the phone will pack a MT6833P chip which could be MediaTek Dimensity 810 or Dimensity 700 chipset.

Further, the device will come with 8GB of RAM. We expect more memory variants at the launch. In addition, the phone will run on Android 11 software.

Also, the phone was recently spotted on the Chinese 3C’s listing which revealed that the handset will come with support for 33W fast charging. Connectivity options could include 5G, 4G, dual-band Wi-Fi, Bluetooth, GPS, and USB Type-C port.

Meanwhile, Poco C31 was recently launched in India in two configurations — 3GB RAM + 32GB storage and 4GB RAM + 64GB storage options. These models are priced at Rs 8,499 and Rs 9,499, respectively. The phone is available for purchase on Flipkart. It comes in Shadow Grey and Royal Blue colours.

Poco C31 comes with a 6.53-inch HD+ display with 720×1600 pixels resolution with a 20:9 aspect ratio. The phone is powered by an octa-core MediaTek Helio G35 SoC, paired with up to 4GB RAM. In addition, the Poco phone has 32GB and 64GB of onboard storage options with external storage of up to 512GB via a microSD card card slot.

In addition, the phone runs Android 10 with MIUI 12 on top. It packs a 5,000mAh battery with 10W charging support. The phone has a rear-mounted fingerprint scanner.