Redmi K50 series will be announced on March 17 in China. The series include Redmi K50, K50 Pro and the K50 Pro+ smartphones. 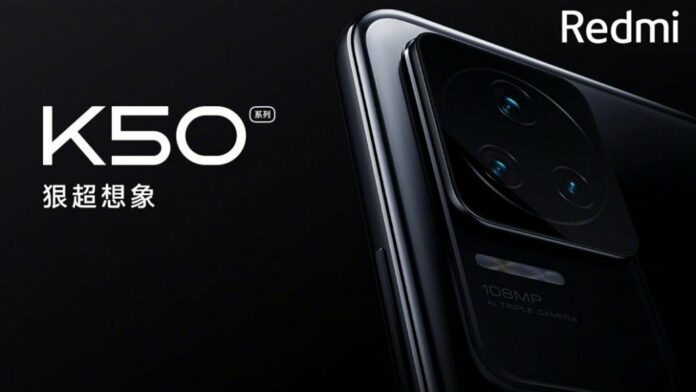 Redmi has today officially announced the launch date for the upcoming Redmi K50 series. The brand has confirmed to launch the Redmi K50 series of smartphones on March 17 in China.

The company is expected to unveil three models under the K50 series – the Redmi K50, K50 Pro and the K50 Pro+. The phones will be launched at 7 PM (local time).

Redmi has already confirmed Dimensity 8100 SoC for one model. Now it has also been confirmed in the teaser shared by the company that one phone will have a 108MP main rear camera along with two other cameras. The teaser however does not reveal any other specifications.

As per rumours, the Redmi K50 will come with a 6.6-inch OLED display and 120Hz refresh rate. The phone will come powered by a Qualcomm Snapdragon 870 chipset. In addition, it will also pack a 4700 mAh battery with 67W fast charging support.

The Redmi K50 Pro, on the other hand, will reportedly pack a MediaTek Dimensity 8100 SoC. The K50 Pro may carry support for 67W rapid charging.

Besides, the top of the line Redmi K50 Pro+ will feature the MediaTek Dimensity 9000 SoC and three storage options. The device will carry support for 120W fast charging.

Lastly, all the phones are said to run MIUI 13, which is based on Android 12 out of the box. Apart from these, no more specs are known at the moment.