Realme XT 730G to be launched in December 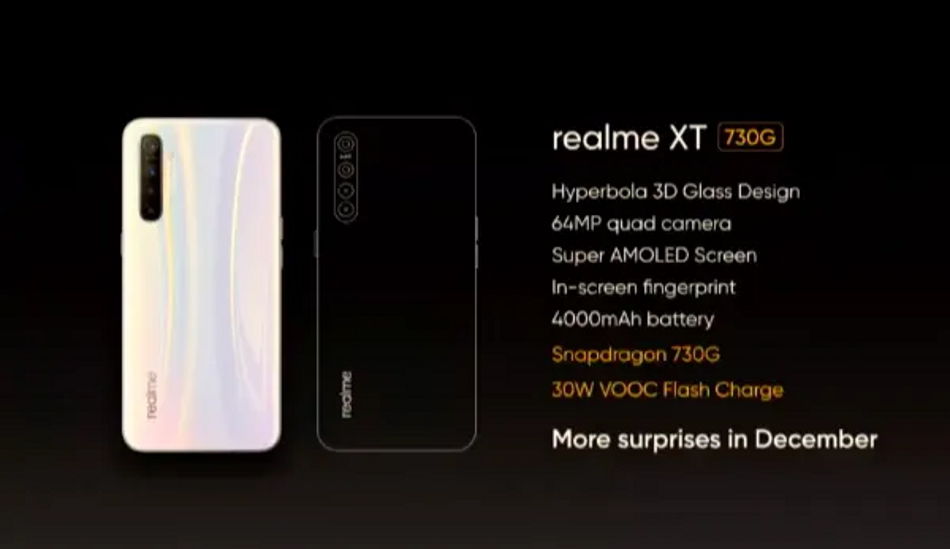 Realme today launched RealmeXT, Realme Buds wireless and Realme 10000mAh power bank in India. At the launch event, the company also revealed that it would be launching the Realme XT 730G smartphone in December this year. As the name suggests, this upcoming smartphone will come with the Qualcomm Snapdragon 730G chipset.

Additionally, the Realme XT 730G will come with 30W VOOC fast chargingsupport. We already know that the rest of the specifications of the phone will remain the same as Realme XT.

To recall, Realme XT is India’s first smartphone with a 64MP Quad camera setup. It sports a quad-camera module which houses a 64-megapixel Samsung ISOCELL Bright GW1 sensor with an f/1.8 aperture and electronic stabilisation, an 8-megapixel wide-angle camera, a 2-megapixel macro camera, and a 2-megapixel depth sensor for portraits. For the front, it has a 16-megapixel sensor for selfies and video calls.

The smartphone runs on Android 9.0 based on ColorOS 6.0 and comes packed with 4000mAh battery along with VOOC 3.0 flash charge support. Realme XT features a 6.4-inch Super AMOLED display with a waterdrop notch design, Gorilla Glass protection and in-display fingerprint sensor. The company has also placed Gorilla Glass on the back. It is powered by a Qualcomm Snapdragon 712 AIE processor along with Adreno 616 GPU.

It also has face unlock feature as well. Connectivity options include 4G VoLTE, Type-C port, WiFi, Bluetooth 5.0 and GPS/ A GPS. The phone is loaded with HyperBoost 2.0 technology that consists of System Boost, Game Boost and App Boost.