Realme Watch 3 is all set to launch in India. 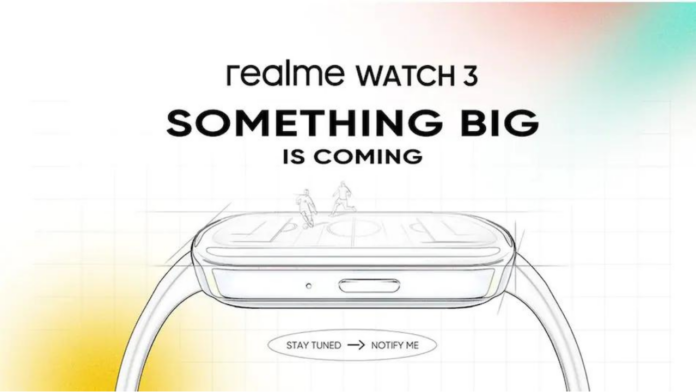 Realme has created a landing page to tease the launch of the Realme Watch 3 smartwatch in India. This page confirms some specifications and design features of the wearable through sketch-like illustrations. Realme has further confirmed that the Watch 3 will feature Bluetooth calling function and a display larger than the Realme Watch 2. Apart from this, not much is known about the watch at the moment.

Interestingly, Realme TechLife has also teased a smartwatch with similar design features. It can be seen with a square black dial and a grey strap. It also shows a rectangular physical button on the side.

In other related news from the brand, Realme is all set to unveil a new tablet in India as well, called the Realme Pad X. The microsite for the same is now live on Realme India’s official. In addition, the Realme Pad X is also confirmed to be available on Flipkart after its launch in India. To recall, the Realme Pad X was first launched in China back in May this year.

The Realme Pad X sports an 11-inch LCD display with a 2K resolution. The panel has support for sunlight mode and a TÜV Rheinland-certified hardware-level blue light filter. Further, the screen has 450 nits of peak brightness with 84.6% of screen-to-body ratio. The Pad X is powered by the Snapdragon 695 chipset paired with up to 6GB of RAM an up to 128GB of storage.