Realme Pad Mini will have an 8.7-inch screen and a significantly smaller profile than the current Realme Pad. 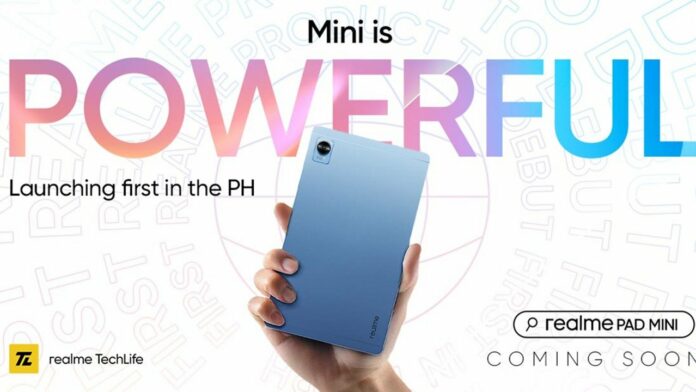 Realme is currently gearing up to launch an Android tablet called Realme Pad Mini. The new Realme tablet will debut first in the Philippines on April 4. Now the Realme Pad Mini is also said to launch in India.

Tipster Abhishek Yadav has claimed that Realme Pad Mini will make its debut in India. Ahead of its official launch in Philippines, the tablet has been teased with teaser images that confirm some of its key specifications. It is also listed on Lazada’s website with the full specs sheet.

Further, the tablet will be powered by the Unisoc T616 chipset, a 12 nm chipset. The teasers further reveals that the tablet will come with 3/4GB of RAM and 32/64 GB of in-built storage which will be expandable.. It will be backed by a 6,400mAh battery and will support 18W fast charging.

The device will sport a slim profile of 7.6mm and weigh 372 grams. For the optics, the front side will have a 5-megapixel camera for selfies and video calls. Its rear side will feature an 8-megapixel shooter.

Meanwhile, Realme GT Neo 3 is tipped to launch in India in April or May. The upcoming Realme GT Neo 3 has been certified by BIS (Bureau of Indian Standards) with model number RMX3561. The listing suggests that the phone will soon be launched in India.

The listing was first spotted by tipster Abhishek Yadav (@yabhishekhd) who says that the handset might arrive in India in late April or early May. The tipster further says that the Realme smartphone has also recently bagged the SIRIM certification with the same model number. BIS is the Indian certification site which stands for Bureau of Indian Standards. SIRIM stands for Standard and Industrial Research Institute of Malaysia.